Charred wood, lead shingles and molten glass are among the materials used by artist Anders Ruhwald to transform a vacant Detroit apartment building into a public art installation that acts as a memorial.

The installation, called Unit 1: 3583 Dubois, is located inside a once-dilapidated apartment building on Detroit's East Side.

Anders Ruhwald – an artist from Denmark who now works in the US – purchased the brick building in 2014 and has been working ever since to create the immersive installation, which is meant to honour the building's history.

"The permanent installation is both a memorial and a proposal in which materials and forms coalesce to retell, and thus reclaim, the past, animate the present, and suggest a shifted future," the artist said.

The building dates to 1910. Interestingly, its original address – 3583 Dubois – no longer exists. Long ago, the city give the building a new address of 2170 Mack Avenue. This change, while seemingly harmless, erases part of the building's past and compromises one's memory of place.

"It is a subtle change, but one that underscores a metaphoric loss of this place's history," said Ruhwald. "Like so many in Detroit and cities like it, this once-abandoned building holds memories waiting to be erased or revived."

The 7,000-square-foot (650-square-metre) building has undergone a meticulous overhaul. Several hallways and eight, full-sized rooms have been converted into dark, windowless spaces with abstract ceramic sculptures made by Ruhwald.

In one closet, a bulbous piece called Bag (no bones) hangs ominously. In another, a lollipop-shaped object stands tall in a room. Fully concealed inside is a 150-watt lightbulb, which emits no light but generates heat. 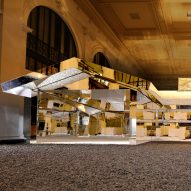 Throughout the dwelling, Ruhwald used repurposed materials he found in the building and the surrounding neighbourhood, including lead shingles, crusty bricks and pieces of wood.

Several images show black tubes suspended from the ceiling, which are actually cast-iron window counterweights that Ruhwald collected at abandoned sites in the area. He managed to amass about 400 of them.

"If you Google the area where the building is located, you will see that it is essentially surrounded by meadows – but it used to be filled with dwellings, which now all have been demolished," the artist told Dezeen.

Materials that evoke fire were liberally incorporated, such as charred wood, ash and molten glass. Ruhwald also used petroleum coke – a byproduct of oil refineries – to cover all surfaces and objects within a bathroom.

Beyond its melancholic atmosphere, the installation is meant to toy with spatial perception. Ruhwald gutted a kitchen and created "a new room inside the room," which is covered in black tiles and tilted on an eight-degree angle toward the doorway. The grout lines give the illusion of the room being level, resulting in a sense of unbalance among visitors.

The installation is open to the public, with tours being offered from April to October. The artist intends to keep the installation open for years to come.

Ruhwald's installation is among those featured in Material Detroit, a series of public art programmes held throughout the city from June to October.

The programmes are connected to a sweeping exhibition now on view at the Cranbrook Art Museum. The show, called Landlord Colors: On Art, Economy and Materiality, examines work made during times of economic and social crises in various places, including Detroit, Cuba and Greece.

Other recent installations in Detroit include a house-shaped pavilion wrapped in mirrors by artist Doug Aitken, which was installed in an abandoned bank building, and a colouful lighting scheme by artist Phillip K Smith III that adorns an unused skybridge linking two towers in the downtown district.

Photography is by Jerry Birchfield/Field Studios.