Yalin Architectural Design made shutters from the wooden planks used for the board-formed concrete frame of Goat House, a holiday house in a small farming village in Turkey.

The Istanbul-based practice co-founded by Yalın Mimarlık devised a sloped concrete form for Goat House, so the taller end frames views over the lush Aegean landscape.

Shutters running along this south-facing facade can open to the landscape, or be closed to shut the house up when it isn't occupied.

A large overhang from the concrete roof creates a shaded area in front of the house, where built-in benches and cabinets minimise the need for outdoor furniture.

At the back a more sheltered, gravelled area connects to a driveway that leads down from the village road above.

Goat House, which is named after the animals that roam the nearby cliffs, is located in a village three miles from the sea, made up of just 20 households who rely on agriculture and beekeeping.

"Our idea was a simple rectangular prism that sits on the top of the terrain like an observation deck," said the architecture studio. 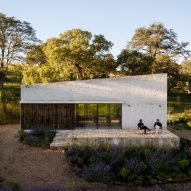 "With its soft concrete texture and modest height, the Goat House is built as a window opening to the Aegean landscape, surrounded by hills, greenhouses and agricultural areas."

Yalin Architectural Design deliberately used a limited range of materials to create a simple house for the client, who grew up in the village.

Goat House's interiors have been finished with white plaster and cast terrazzo.

The plan is divided into two by a central, courtyard-like space where a section of the roof has been cut-out.

To one side is a large living, kitchen and dining space, and to the other the bedrooms and bathrooms, connected via a corridor running along the back of the house.

The practice has recently completed the Museum of Troy in Turkey, with a corten-clad form designed to resemble and excavated artefact.

Photography is by Egemen Karakaya.