The fact that Norman Foster wants to start building social housing again after 40 years is a sign that a lot of it may be about to be built, says Owen Hatherley.

In the 1970s Foster designed a council estate for the first and last time. Beanhill, in Milton Keynes, was devised in the early 1970s by the young firm during the last period that the amount of council housing builds rivalled those of the private market.

It was planned as an experimental, Archigram-type scheme of clip-together small houses, in an informal, suburban layout. Shortages of materials and problems on site led to what you'll find there now – scattered tin houses with great big mock Tudor pitched roofs attached in the 1990s to stop the incessant leaks.

Unlike other Foster projects in non-metropolitan England in the 1970s – say, the Sainsbury Centre in Norwich, IBM in Portsmouth, or Willis Faber in Ipswich – it's unlisted and unlistable. After this showing, it's doubtful they'd have been asked to design housing again – until now, that is.

Alongside recent reports that show a sharp rise in council housing completions in Britain comes the news that Foster + Parners, by now a globe-bestriding architectural megacorp, is planning to get into the non-market housing market. This isn't a sign of social commitment –  something that has never been much of a factor for Foster – but due to the fact that a lot of it might be built soon. So what could Foster bring to social housing today?

After its last showing, it's doubtful they'd have been asked to design housing again – until now, that is

The lifting of the borrowing cap on local authorities makes building on a large scale more plausible than it has been since the early 1980s. The smarter councils have been setting up shell companies to build directly, which is surely a response to the fact that the previous policy of getting developers to contribute percentages of affordable housing has very clearly not had any impact on the housing crisis.

Action is sporadic, and sometimes, the new council housing is only debatably social (austerity has left most local authorities in Britain desperate for cash, so the new council-developed housing is sometimes, as at the overpraised Colville Estate in Hackney, sold on the open market).

But by now, the market is so obviously dysfunctional that even the departing PM Theresa May has talked about building council housing, something that the New Labour governments considered tantamount to Trotskyism. Meanwhile the 100th Anniversary of the Addison Act, which made mass council building possible, has led to a great deal of celebration of council housing. This has often come from councils that have otherwise been trying to get rid of their stock as quickly and cheaply as possible.

And this isn't just in the UK. In the US, a similar housing crisis has led to demands for new public housing – and that in a country where non-market housing has an extremely poor rep, and has even been banned at various points in major cities.

So we're almost certainly going to see more social housing in the next few years. What can we expect this to look like?

Social housing – extremely broadly speaking, housing that is provided outside of private business, sometimes, but not always, targeted at people who can't afford to get onto the "ladder" – is built, even today, and it comes in a variety of forms. There's the HLM system in France, which is probably most similar to the British council allocation system aimed mostly at working class communities.

Elsewhere, non-market providers of housing such as housing associations and co-operatives are still building to some extent in the residual social democracies of northern Europe.

It's actually built at a far larger scale in Hong Kong and Singapore, both of which are still dominated by mass council housing. This is something that is seldom mentioned when these maritime city-states are held up as exemplars for post-Brexit Britain. (This is also one reason why hot money from east Asia is awash in London is that it's relatively harshly regulated at home).

System-built towers in rows are still normal, even if they have standards well above those of the past

Most of this happens without the input of fashionable architects – these public housing programmes, for instance, run entirely parallel to the photogenic city baubles that aim to "put them on the map". System-built towers in rows are still normal, even if they have standards well above those of the past.

Conversely you'll find that architect-designed social housing in the west today consists overwhelmingly of small-scale infill, reflecting the chastened best practice that visually distinguishing social housing from market housing is unwise. This forgets that "built by the city" could be a sign of pride, as it was in 20th century Vienna and London, rather than a badge of shame.

Probably the majority of it is in France, especially in Paris, where reduction of a stark centre/periphery divide has been a priority of the city government. So the new housing might commonly continue a broken street line, or carefully follow the scale of its predecessors on site; more ambitiously, you can find Lacaton and Vassal's extraordinary renovations and extensions of mass housing estates – though building at the same scale as those estates is never seen.

You'll also find a very small amount of US examples, such as basically charitable housing in the Bronx, a rare US example whose tiny flats are a rather dubious model, suggesting that social housing should be built to lower specifications than private (20th century reformers more often did the opposite).

Perhaps a firm like Fosters, skilled at creating airports on man-made islands or stretching viaducts across mountains, could be able to usefully apply their skills

Some of this is very fine housing. Something like the Sonnwendviertel in Vienna, for instance, with its integrated vegetable market, its cinema for residents, its delightful public spaces and its spacious flats, is a great model for anywhere to follow.

But when we're dealing with places that have a housing crisis on the scale of London or New York, the idea that social housing has to be modest, bespoke and quiet may not be enough. This is a giant problem, caused by 40 years of inaction.

At least in the bigger cities, the solutions might need to be giant too, and might need revolutionary solutions – so far, only Peter Barber's proposal for a ring of new council housing stretching around London has come close to accepting that the housing crisis will not be solved by craft and derring-do. 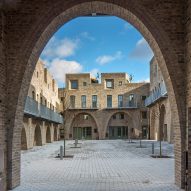 Perhaps this is where a firm like Fosters, skilled at creating airports on man-made islands or stretching viaducts across mountains, could be able to usefully apply their skills.

However, there's places you can actually get a look at what Foster doing social might actually look like. The firm designed a dozen or so private-public "City Academies" in British towns and cities in the 2000s, and they all look like mini-business parks. They were also built cheap - some of them now look nearly as knackered as Beanhill.

Maybe that's because building a social architecture can't be about just pointing the existing industry at the problem and telling it "sort that". It needs to have social ideas, too, and needs to be able to embody them in space. Most contemporary architecture is still a long way from that.

Photography of Beanhill housing in Milton Keynes is by Tom Ravenscroft.