Ancient sundials and puzzling video games informed the interiors of this restaurant and bar southwest of New Delhi, designed by architecture studio Renesa.

Unlocked is a bar and kitchen in the city of Gurugram that includes its own adventure-themed escape room and a selection of over 100 board games.

Featuring bold hues and geometric forms, the venue has been designed by locally-based studio Renesa to "instantly transport [visitors] to an uncertain realm".

"The concept was to manipulate the space in order to create multiple pockets that arise from an array of lines and shapes," added the studio.

The restaurant, in turn, features a series of teal-blue or peach-coloured partitions punctuated with vaulted openings. They lead through to dining rooms that have been completed with square black tables and tan-leather seating banquettes. 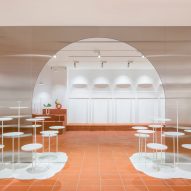 Some of the walls have semicircular cut-outs that look through to small nooks dressed with wood-framed chairs and stools where guests can sit and play games.

Raised stencils with stair-like outlines have been applied to the walls and backlit to seem more three-dimensional.

A feature wall with rows of gabled or arch niches has also been created at the centre of the venue.

While most of the floor has been covered with concrete, some parts have been inlaid with slanting patches of brown, orange and sky-blue ceramic tiles.

The overall colour scheme is completed by bronze, cone-shaped pendant lamps that have been suspended from the ceiling.

Renesa was established in 2006 and is headed up by architect Sanjay Arora. It isn't the only studio to create illusory interiors – earlier this year Studio 10 developed an MC Escher-inspired guesthouse in Guilin, China which boasts anti-gravitational staircases and cotton candy-hued surfaces.