British philosopher Roger Scruton has returned to the Building Better Building Beautiful housing commission, from which he was sacked three months ago for making controversial comments about Chinese people and Jewish philanthropist George Soros.

Scruton has accepted the role of co-chair of the commission, which is setting out guidelines for architects and developers on house building.

Scruton was sacked from his role as chair by housing secretary James Brokenshire in April 2019 following comments Scruton made in an interview with the New Statesman, which a spokesperson for the ministry of housing described as "unacceptable".

In the interview, Scruton said that each Chinese person "is a kind of replica of the next one" and that people who didn't think that Jewish billionaire George Soros was running an empire in Hungary "has not observed the facts."

He also said that islamophobia was "invented by the Muslim Brotherhood".

Scruton claimed the comments were taken out of context. The New Statesman subsequently released a full transcript and audio recording of the interview to contextualise the quotes and apologised for how they had been represented on social media.

In an exchange published in the Spectator this week, Brokenshire wrote to Scruton asking if he would like to be re-appointed to the commission and co-chair it with the interim chair Nicholas Boys Smith. 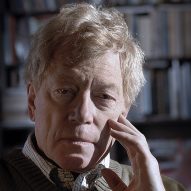 "I know that you still have so much more to give and hope this may also help to put things right after the regrettable events of recent months," said the housing secretary.

Scruton accepted the role of co-chair, writing that he was "so pleased that all has been resolved in a friendly way" and expressing his desire to "return to the matter in hand, which is so important".

The Building Better Building Beautiful commission was launched in November 2018 with the aim of addressing the UK's housing crisis by improving the quality of developments in the planning pipeline.

Scruton, who is outspoken in his dislike of many top architects such as Norman Foster and Daniel Libeskind, told Dezeen at the time of the launch that his mission was to protect the public from architects "imposing" their own ideals.

His appointment proved controversial, with architects warning he would reignite the "architectural culture war of the 1980s".

Comments Scruton had made in the past about date rape and homosexuality also brought attention to the commission, as did his suggestion that the Grenfell Tower fire wouldn't have happened if the building "hadn't been so ugly".

An interim report published by the commission in July urged councils to "say no to ugliness" with new residential developments.

The role of housing secretary is expected to change with the upcoming cabinet reshuffle from the new prime minister, Boris Johnson.

Update 26 July 2019: Brokenshire was sacked as housing secretary in the reshuffle, and replaced by Robert Jenrick. Housing minister Kit Malthouse, who told Dezeen he wanted architects to work with the commission to pressure developers, has been succeeded by Esther McVey.