Nook Architects has reduced the size of bedrooms in Caldrap, a flat in Barcelona, to make room for a spacious and versatile new living and dining space.

The home is located in an ageing high-rise in the city's Poble Sec neighbourhood.

With 67 square-metres of floor space, it was spacious enough to accommodate its new owners – a family of three. Yet none of the rooms was big enough to allow its occupants to spend time together or to host guests.

They asked Nook Architects to design a new layout that would better suit their lifestyle.

"The owners were looking for a home for their family of three, in which the common space would be the main focus," explained the studio, which is led by Ana Garcia, Joan Cortés and Rubén F Berenguer.

"With this in mind, it was decided to give the bedrooms and other spaces secondary importance, while ensuring their functional and storage needs were still met," said the architects.

"This important step allowed us to modify the existing layout and create a wide, open daytime area: an all-in-one living room, dining room and kitchen."

The new layout centres around a gallery-style space at one end of the home, featuring a row of traditional wooden-frame windows that face out over a verdant garden.

Nook expanded this space by relocating the bathroom to the other side of the home and opening it up to two adjacent rooms that were previously separate.

But rather than making the room completely open-plan, the architects chose to keep sections of the walls intact. These help to loosely divide it into a kitchen area, a lounge space, and an area for dining and entertaining.

The space also includes a corner snug with a custom-designed daybed.

"The bespoke sofa can be transformed into a bed for guests, or simply a place to read or have a siesta," explained Nook Architects.

Materials and finishes were chosen to match with existing details in the property. Wooden joinery and flooring matches the tones of the original windows, while the terracotta tones of a traditional Catalan vaulted ceiling are complemented by pale mint-green walls.

Other details include monochrome floor tiles with a geometric pattern and a white marble kitchen island.

"The materials used in this project were limited to those previously present: wood, marble and ceramics," said the architects. "This combination is present throughout the apartment and serves as a common thread that connects all the rooms." 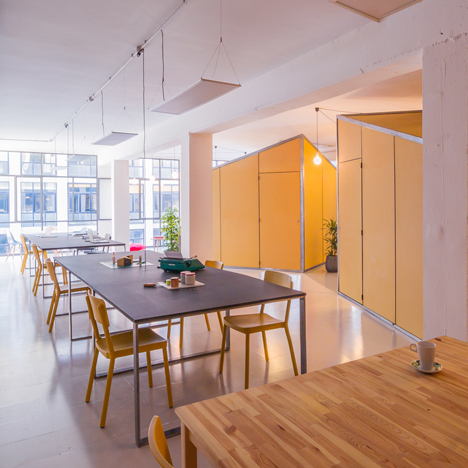 The other rooms in the flat are compact, but designed to make efficient use of space. Built-in wardrobes now feature in both bedrooms, and there is a separate dressing room offering additional storage space.

The new bathroom is larger than the previous one, plus there is also a utility room.

"The intervention provides the apartment with an optimal level of thermo-acoustic and functional comfort, which will enable the owners to make the most of the everyday moments of their modern lives, while enjoying a luscious, verdant oasis in the heart of the city," added the architects.

Nook Architects has built its reputation on sensitive renovations of period properties in Barcelona. Other recent examples include a home with a tiled artwork covering one wall and a flat where mirrors are used to make spaces feel larger.

The team also designed its own studio space in a renovated 1970s building in El Poblenou.

Photography is by Gael del Río.