A curtain of red timber panels drape around the entrance pavilion to the Eriksberg Hotel & Nature Reserve in Blekinge, Sweden, designed by Sandellsandberg.

Named Outdoor Eriksberg, the bright red building was designed by Swedish studio Sandellsandberg to improve the quality and navigability of the nature reserve's entrance area.

It has a "textile look" intended to evoke a theatrical curtain opening up to reveal the nature reserve, and is the first of a series of structures that the studio will design for the park.

"Previously there was no distinct entrance to the nature reserve, which at times made visitors turn at the gates in confusion," explained the architecture studio.

"Hence, the biggest challenges were to strengthen the site's identity and give presumptive visitors a welcoming first impression of the reserve. The vision was to provide the nature reserve with modern buildings, but with an overall design reminiscent of the traditional architecture of Blekinge."

Outdoor Eriksberg measures 600-square-metres, and has the form of a giant cabin that Sandellsandberg modelled on barns and traditional longhouses – a type of long and narrow timber dwelling with a single room. 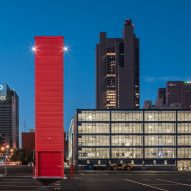 It has a wooden structure built with traditional Blekinge building techniques, and is complete with large windows and an asymmetric thatched roof.

The bright red wooden panels extend down from the thatched roof, undulating around its edges to offer glimpses through the glass walls of the building inside.

They also drape upwards at either end of the building to provide access to two courtyards flanking the interiors.

The courtyards lead visitors inside through giant glass doors, where they are welcomed by a cafe, shop and an exhibition space for public events and lectures on a mezzanine floor above.

These spaces are all complete with the bright white finishes that contrast the building's shell, and are lit by a giant skylight and bulbous rattan light shades that run the length of the building.

Other projects by the studio include the brass-lined Primewine Bar in Stockholm, and a lofty house in an old fishing village that has pale pine floors, high ceilings and a concrete fireplace.

Photography is by Åke Eson Lindman.