A furry, fox-like creature moves frantically in this ad, created by branding agency Superunion and animation designer Esteban Diacono for a performance of opera The Cunning Little Vixen.

The designers tried to visualise a struggle between man and nature in the motion graphics. Their aim was to capture the emotionally charged spirit of the classic Leoš Janáček opera, to promote a new performance by the London Symphony Orchestra and the Barbican.

The 25-second-long animation shows an abstract, faceless creature thrashing around, as if it's trying to escape from itself.

The animation is based on movement data that Superunion captured over two years ago, when it was developing a new visual identity for the London Symphony Orchestra.

Instead of the classical imagery that often accompanies orchestral music, the designers wanted to develop something more contemporary to appeal to a younger audience. 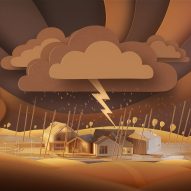 They dressed the LSO's newly appointed music director, Simon Rattle, in a motion-capture suit, to create a visual map of the expressive movements he makes when conducting an orchestra.

They then worked with a digital artist to transform this data into a series of intricate animated graphics.

This data has since been used for several LSO campaigns, but each time a new artist is asked to put their spin on it.

Superunion chose to work with Argentinian animation designer Esteban Diacono on Cunning Little Vixen, after being impressed by his previous work with fur.

The opera follows the life story of a clever fox, as she faces the challenges of life and death. According to Radford, the story explores love, survival, darkness and joy, and is at times "quite dark and almost slightly twisted".

The first step was to build the main structure of the visualisation and then animate this in time with Rattle's movements. Once this was in place, they started experimenting with the texture and look of the fur, as well as the lighting.

"It starts off quite well lit and over the course of the animation it gets slowly darker and darker as the music builds," said Radford. "It almost gets a little bit sinister towards the end, amplifying the mood."

The piece is deliberately abstract, to add to the drama, although the colouring of the fur is very similar to that of a fox.

"Fur is particularly challenging," explained Radford. "The number of hairs rendered on this thing is in the millions."

"It's obviously a very surreal piece but I think that adds to it, that makes it more emotive, more evocative," he added.

It included two fonts, which also feature on the posters for The Cunning Little Vixen. The design has won the studio numerous awards, including a Wood Pencil from D&AD and a silver award from the Cannes Lions.

The Cunning Little Vixen was performed at the Barbican in London from 27 to 29 June, in a semi-staged production sung in Czech.

The Barbican is currently showing the AI: More Than Human exhibition, that looks at recent research projects in the field of artificial intelligence, from the University of Washington's Synthesizing Obama "deep fake" video to Neri Oxman's Synthetic Apiary.