Imaginary Language is a set of basic geometric objects that can be combined to create a variety of new forms. Users can then assign functions and meaning to their creations and play with them.

Romario developed Imaginary Language as her graduation project to complete her degree in Product Design at the Royal College of Art in London.

According to Romario, the set of objects was designed to encourage creative thinking in its users.

"It's a tool to foster creativity," she said in this video interview, which was shot by Dezeen at the Royal College of Art graduate show.

"My research is based on a psychological theory by Irving Biederman," Romario explained. "According to him, our brains are able to recognise objects by dividing them into geons, which are geometrical primordial shapes."

"I designed this system that allows the user to assemble those shapes and build up forms," she continued.

The set of simple shapes are designed to encourage creative play amongst children.

"For me, creativity is a really important value to learn," said Romario. "It was really nice to see children play with this game, and how different children assign different functions to even the same objects."

The objects can also be used as tools to aid actors in dramatic exercises.

"I have a background in acting, so I decided to try those objects with actors, and we developed a series of improvisational exercises," she said.

Romario also developed a modular furniture collection based on the forms and principles of Imaginary Language.

"I took inspiration from the abstract forms made from Imaginary Language to create a collection of furniture called Creo," she said. "Creo is made of geometrical shapes that, thanks to a joint, the user can assemble in different shapes and assign a function to them." 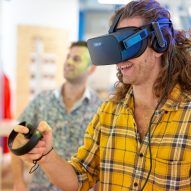 Romario stated that she sees an opportunity for the disciplines of product design and education to complement one another.

"I see myself as a product designer, but I think that education is really important and I will keep designing for children and using design as a tool to educate people," she said.

This video was shot by Dezeen at the Royal College of Art's 2019 graduation show.