A canopy of tree-like timber columns crowns the double-height living space at the centre of this polycarbonate-clad house, which JK-AR has completed in South Korea.

Named The House of Three Trees, the residence centres around the ornate wooden structure that JK-AR has created by merging the traditional wooden joinery technique Gong-po, otherwise known as Dougong, with digital modelling and fabrication.

The house intends to reintroduce old timber construction techniques that were once commonly used across east Asia, and showcase their potential when combined with contemporary building technologies.

"The house redefines the virtue of east Asian timber buildings in its tectonic aspect which is a combination of structure and ornamentation," explained the architecture studio.

"Moreover, the house serves as an example of how contemporary technology such as design computation and digital fabrication can reinterpret traditional architecture. Technology can give east Asian timber construction the potential to evolve in a new direction."

The House of Three Trees' structure is composed of 4,006 individual pieces of wood, which are joined to create three tree-shaped columns. Above, the "trees" meet to form a canopy that spans the ceiling of the house.

The way in which they are combined means that they form a solid structure without the need for glues or fasteners. 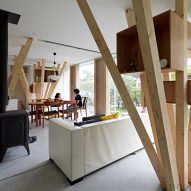 "The tree structure of the house is solely composed of wooden joinery," added the studio.

"The construction method without using additive fastener such as nails is not only intended to follow traditional methodology, but to show the sheer strength of engineered timber as a structural element."

While the canopy has enabled JK-AR to create the home's large open-plan living space, it also provides support for the roof and distracts from a hidden mezzanine level, kitchen and bathroom that the practice has nestled along one edge of the space.

The tree-like structure is barely visible from outside. Instead, The House of Three Trees is distinguished by its giant angular roof and its polycarbonate and plywood cladding.

Clad in thin, locally sourced asphalt shingles, the pitched roof is intended to evoke a weightless, floating form over the residence while ensuring efficient water drainage.

Meanwhile, the walls are constructed with plywood panels that are wrapped with polycarbonate. These are designed to provide insulation and rainwater protection during the cold winter in South Korea, and also give "an ethereal lightness to the building".

The house is complete with angular clerestory windows that JK-AR has incorporated where the walls and roof should meet, which flood the interiors with natural light while maintaining privacy.

As the light is drawn in through the windows, it passes through the wooden canopy to filter dappled light below to "resemble the sunlight falling into a forest."

LUO Studio also recently designed a tree-like structure to construct an office building. Located in Henan, China, the modular columns can be applied independently or combined with others like Lego.