Sonia Norskog is an interior architect at Hacker Architects in Portland, which specialises in the residential, educational and cultural sectors. She explains her career progression for the Dezeen Jobs careers guide.

Norskog's role sees her responsible for developing exterior and interior concepts for a variety of clients, with a particular focus on large-scale cultural and educational projects.

Working with a wider team of designers, her work involves determining how internal spaces are experienced, from careful selection of materials to overseeing the design of furniture, fixtures and fittings.

Norskog described herself as the "go-to person for large institutional programming" at Hacker Architects.

"Hearing first-hand what the users need is the best way to give them a space that really works for them," she explained. "I become an advocate for the users when designing their spaces and come back to them throughout the project to make sure we got it right." 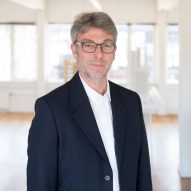 Norskog began her architectural studies at the Lawrence Technological University in Southfield, Michigan, and later obtained a masters of science in digital technologies at the University of Michigan.

While she credits her education for establishing her design-thinking, she explains that "the majority of what I do now, I learned while on the job".

Norskog has since worked at a number of influential design firms across the US, including SmithGroup in Detroit and Gensler in Chicago.

Her time at Gensler took her to Portland, designing the headquarters of a pet hospital just outside the city. It was in Portland that Norskog found her current role at local firm Hacker Architects.

Three years on at the architecture studio, Norskog describes the "collaborative environment" and the "strong focus on sustainability" as the best parts of working there.

"Everyone's ideas are heard and encouraged. We don't have big egos and we do great work."