Casa Burés – which is longlisted in the apartment interior category of this year's Dezeen Awards – has been designed by Vilablanch in collaboration with TDB Arquitectura to feature a host of modern fixtures and furnishings that "don't compete with or imitate the original ones".

The studio has refurbished all 26 apartments in the building, ranging from vast living quarters with frescoed ceilings, to more pared back, white-walled flats.

"We opted for an elegant and sophisticated interior design that recovers and enhances the valuable decorative elements that are part of the history of modernism," explained the practice, which is lead by Elina Vilá and Agnès Blanch.

"They're accompanied with elements that are equally refined, but serene, less ornate and silent."

The six-floor building was erected at the beginning of the 20th century by Spanish architect Francesc Berenguer i Mestres and takes its name from its first proprietor, Francesc Burés – a wealthy businessman who owned several textile companies.

Despite gaining listed status in 1979, over the years Casa Burés had been vandalised and fallen into a state of disrepair.

Vilablanch therefore worked alongside locally based firm TDB Arquitectura to completely restore existing features and make it functional enough to suit the "comforts of current life".

One floor now accommodates a pair of "palatial" apartments that are meant to be reminiscent of Burés' past living-quarters. Each one sprawls across 500 square-metres and features ornate moulded ceilings and mosaic floors. 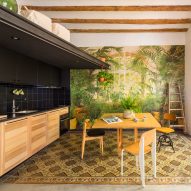 Rooms are connected by lengthy corridors with stained-glass windows or frescoed rotundas with floor-to-ceiling gilded panelling.

Furnishings come in the form of minimal white sectional-sofas and jewel-tone velvet armchairs, while stainless-steel cabinetry has been installed in the kitchens.

The ground level, which Burés once used as a production space for textiles, has been converted into three loft-style apartments with "strong industrial personality".

Five penthouse apartments and 16 flats have been created throughout the rest of the building, complete with simpler white-painted walls and oakwood floors.

Barcelona homes are often host to an abundance of historic decor details that architects and interior designers are keen to keep.

Nook Architects saved a 40-year-old mural and patterned floor tiles in its overhaul of a flat in the city's Gothic quarter, while Valentí Albareda preserved crumbling brick walls in its design of a triplex apartment in the Sant Antoni neighbourhood.

Photography is by Jordi Folch unless stated otherwise.