The studio, which is run by husband-and-wife duo Kate and Ben Towill, intended the Southern offering to match the cosy aesthetic of the initial location but brought in elements that reference its surrounding in the coastal Georgia city.

Flourishes of Southern charm are brought in through a mixture of custom made and vintage furnishings.

"For The Fat Radish Savannah, we wanted to capture the casual feeling of the original NYC restaurant, but add a warm, Southern element," Basic Projects founder Kate Towill told Dezeen.

"We used ceiling fans, rattan, lush materials and gorgeous warm plaster walls to transport you to a slightly slower and gentler South," she said.

Originally a pharmacy, the space was stripped back to its bare structure, which included existing stone arches and large windows.

The finishes are rustic, including exposed ceiling pipes that are painted white, wood flooring and walls covered in roughly marked green plaster. Completed by hand, the rendering is intended as a nod to the restaurant's menu, which uses locally sourced ingredients.

"The Radish is known to push the veggies, so we certainly wanted the plaster colour to have a weathered-green tint," said Towill.

Alongside the rattan chairs and others upholstered in yellow fabric, Basic Projects has built a series of banquets covered in a mix of green and dark-brown leather, with curved edges to soften the harsh corners of the space.

Rounded, white porcelain lights that the team created with English ceramicist Amy Frankie Smith cling onto the walls throughout the eatery.

"With most millwork corners curved, soft leather banquettes and milk glass lights glowing, you will want to cosy up in the corner with an icy cocktail and delicious locally-sourced plate of food," said the designer.

Additional details include black and white porcelain tiles that cover the floor at the entrance, where a wooden standing reception desk rests, and wrap around the bar. Rattan pendant lights hang above the counter, which features panelling on the front, and a white stone top to give a dated appearance. 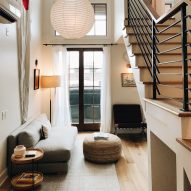 The Fat Radish Savannah marks the completion of a major overhaul of a historic building on the city's Martin Luther King Jr Boulevard, built in 1870. Basic Projects had already transformed the upper floors into the cosy Windrose Hotel, and designed The Fat Radish eatery to occupy the ground floor.

Basic Projects was founded in 2013 when Kate and Ben moved from New York City to Charleston, forming part of a growing creative community in the city in South Carolina.

The studio has built up a portfolio of projects around the Charleston area, including the Basic Kitchen restaurant in the southern US city and a refurbished white residence on nearby Sullivan's Island.

Photography is by Lindsey Shorter.