Desmet already had one studio on his rural property in East Flanders, but it was too small to accommodate larger sculptures.

Graux & Baeyens designed his new space, Studio SDS, in the spirit of a large warehouse, but with some more intimate spaces slotted around the outside.

Materials vary in each space but are left exposed throughout, giving the interiors an industrial feel.

The form of the building is made up of two volumes. The first is a basic cuboid, which contains a double-height studio space. This is wrapped on two sides by a more irregular, single-storey volume that contains a study, a kitchen and bathroom facilities.

The studio showcases the coldest materials, from white-painted breeze blocks to bare concrete.

The whole room is surrounded by a thick concrete parapet that can function as a seat or a work surface. It is matched by thick concrete lintels above the doors and windows, which have an austere but decorative quality.

Overhead, a terracotta tile ceiling is covered with lighting and heating fixtures arranged in geometric patterns.

In contrast, the surrounding rooms are lined with timber to create a warmer aesthetic.

Externally, the materials of both blocks are completely different. The studio has a brickwork exterior, while the smaller surrounding structure has bare breeze-block walls.

The studio's aim was to create a rich mix of forms and textures, referencing the informal arrangement of the rest of the farm.

"The site is characterised by organically grown buildings that vary greatly in terms of materials and finish," explained the studio.

"Together with the other buildings, a congruent story has been managed in which the whole has a reinforcing effect on the components," it added. "The use of materials seeks connection to the main house, the adjacent stables and brooks without falling into copying."

Although the building looks quite basic, it includes several carefully planned details. For instance, the studio is kept symmetrical as the architects felt this would inspire "peace and serenity".

Windows have also been carefully planned. In the studio, a pair of tall glass doors make it easy to move large objects in and out of the space, while a low corner window creates a cosy spot to take a break from work. 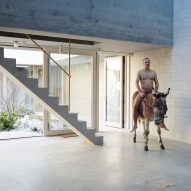 "The corner window forms a place within a place that is a resting point within the large space," said the architects.

Similarly, the study feature a large picture window so that Desmet can enjoy the view while working at his computer.

Graux & Baeyens Architecten is led by architects Koen Baeyens and Basile Graux. Other projects by the studio include a house clad in copper and a family home in a converted warehouse loft.