The permanent daily market was commissioned in response to the growth of the remote village of Dandaji, where the architecture studio also recently converted a mosque into a library and community centre.

The project, which provides the village with 52 enclosed market stalls, has been completed with round, brightly coloured canopies that shade each of the separated lots.

In rural Niger, a landlocked country in west Africa, markets typically run on a weekly basis, meaning that individual villages struggle to develop a local economy.

Dandaji market previously ran on a weekly basis, but the upgraded market now runs every day.

The architects hoped that by rebuilding the regional market it could provide new opportunities for the inhabitants of Dandaji and galvanise a region which has been struggling economically, with climate change greatly impacting agriculture in ​recent years.

"The objective was to create an infrastructure that would be visually striking, instil pride in its users, and attract more commerce to the area," explained the studio.

"Ultimately, an important goal of the project is to create a space that triggers greater confidence and aspirations for the future in the users by offering a dramatic upgrade to this public infrastructure."

Atelier Masomi wanted to maintain some of the design language of the existing market, so they referenced the local market-architecture typology whilst updating it to make it more practical and durable. 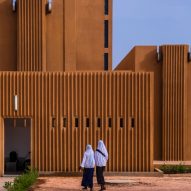 Instead of traditional shading structures made from reed, flexible spaces and alleyways are sheltered by colourful metal canopies of alternating height, encouraging air flow through the market.

As well as providing cover for the vendors, the metal canopies offer solar and thermal protection to the produce below.

"The design shows that modern architecture doesn't have to be based on a western model, but that regional typologies can be used as a base for moving forward," said the architects.

"This has produced a project that is a clear departure while remaining rooted in a way that allows the users to project themselves in it."

While the canopies use recycled metal, compressed earth bricks are used for the stalls to provide cool vending spaces in the arid climate.

These bricks are a relatively new material in an area where cement or adobe, a building material made from earth, are the more commonly used forms of earth-based construction.

With the aim of transferring knowledge and skills, local people were hired as masons on the project, learning how to produce and work with the compressed earth bricks.

Atelier Masomi also involved the village residents in the design process, consulting with them about the  types of spaces they need in order to organise the stalls conveniently and provide adequate storage space.

"Because the Dandaji market project is sited in a remote village, we immediately saw an opportunity to immerse ourselves in the local narrative with hopes of making a contribution beyond programme spaces," said the studio.

"We used this mindset in every aspect of the design from spatial and formal organisation to material choices."

The market is organised around an ancestral tree, which has long been an important public space for the villagers on market day and for the children from the neighbouring school.

The central communal amphitheatre around the tree is now used as a playground for the children during breaks and after school.

"It was important for us to make the tree a focal point to signal that we acknowledge its importance, to protect it going forward, but also to provide a way for people to enjoy its presence fully," said Atelier Masomi.

"The market is laid out to progressively step down to the old tree, the surroundings of which are formalised to become a real public space with seating and rest spaces for all to gather around."

According to the architects, the residents of Dandaji have taken a keen interest in how to take care of the market since its opening and have undergone a one-month upkeep training programme.

"The project has triggered a lot of pride of place in the community and the market vendors particularly," Atelier Masomi said.

"They expressed wanting to make sure it stays with them for a long time, which was an unexpected civic response to the design."

Dandaji market is one of 267 architecture projects longlisted for this year's Dezeen Awards, in the civic building category, along with a Red Cross Volunteer House in Copenhagen, and the Cloud Town Exhibition Centre in Hangzhou.