As congested and low-lying Jakarta sinks rapidly, Indonesia's government has revealed that the new capital city will be built on the island of Borneo.

President Joko Widodo announced that the administrative functions of Jakarta would move to the area of East Kalimantan, reported Bloomberg.

The new capital will be located between North Penajam Paser and Kutai Kartanegara on the Indonesian part of Borneo, 870 miles away from the current capital. The cost of building the new capital city is estimated to be 466 trillion rupiah (£26.6 billion) and construction will take 10 years.

Indonesia's leader claimed that moving the capital to another island will help ease income disparity across the archipelago, although environmentalists fear that the new city could endanger Borneo's tropical rainforests.

Widodo has previously said that the new capital will be a smart city, and kept relatively compact to minimise the environmental impact of deforestation.

The relocation could ease pressure on Jakarta, which has a subsidence issue that has seen the city of 10 million people sink at a rate of 2.5 metres over the past 10 years.

With two-fifths of the city sitting below sea level, reports suggest rising waters caused by climate change could see swathes of Jakarta, which is on the coast of the island of Java, submerged below the waves by 2050.

The city also suffers from intense traffic congestion and dangerously high levels of pollution. There are no plans to relocate the population of Jakarta to the new capital. 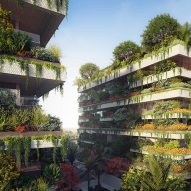 Up to 40,000 hectares of land will be used to create a new city with an estimated population of 1.5 million, with construction due to start in 2020.

This is not the first time in modern history that a nation has relocated its capital city. In 1961 Brazil moved its administrative capital from Rio de Janeiro to Brasilia, a city designed by Oscar Niemeyer, and Myanmar moved its capital Naypyidaw from Yangon in 2005.

Egypt is currently building a new capital in the desert outside of overcrowded Cairo, which is set to feature vertical forest apartment blocks designed by Stefano Boeri.

In Sweden the town of Kiruna is being relocated because it is collapsing into an underground mine.

Main photo is by Aidenvironment.