The Guha project, which is shortlisted in the business building category of the Dezeen Awards 2021, involved the renovation of a building completed by RAW Architecture in 2016, as well as the addition of a larger office studio space for the practice.

The existing building known as The Guild contains the residence RAW Architecture founder Realrich Sjarief shares with his family, along with his wife's dental clinic and a library that helps the local community engage with architecture.

RAW Architecture's design addresses specific economic, social and environmental issues relating to sustainability, placing emphasis on the use of local building methods such as bamboo construction.

"From an environmental perspective, it seeks to reduce emissions and the carbon footprint generated by construction activities through the implementation of local materials."

The architecture of both the new and old parts of the building responds to Indonesia's tropical climate by orienting spaces to prevent overheating from direct exposure to the sun, while allowing breezes to naturally ventilate the interiors.

Openings in the concrete facades are carefully positioned to allow daylight to enter, and the building's western elevation is covered with plants that provide shade. The landscaping includes trees and water that help to create a comfortable microclimate.

RAW Architecture’s studio is now housed in a three-storey structure with two basement levels that adjoins the eastern side of the existing building.

The new structure, called Guha Bambu, features a bamboo framework that supports the floor plates as well as a roof constructed with steel trusses.

Externally, the bamboo is painted to improve its resistance to sunlight and rain.

The curved forms and woven elements are influenced by the design of traditional Barong masks, which the architect encountered as a child in Bali. 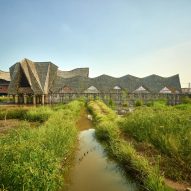 Some of the spaces employ a traditional Javanese construction method known as Tumpang Sari, which involves creating a stack effect to help remove hot air through openings near the top of a chimney-like volume.

The building's interior showcases the bamboo construction in its raw form and is intended to evoke a bamboo forest. Splayed pillars support the floors and screens made from split bamboo pieces are used to separate the spaces.

The use of bamboo construction was based on RAW Architecture's experience working with the material to construct parts of a school in the city of Tangerang.

The Alfa Omega school building is raised above a swamp on stilts and features a zigzag roof made from thatched bamboo.

Architect Realrich Sjarief established his studio in 2011 and focuses on combining locality and craftsmanship to create projects that are simple, humble and unique.

RAW Architecture, which stands for Realrich Architecture Workshop, was longlisted in the emerging architect of the year category of the Dezeen Awards 2020.