Perforated metal screens and plants cover the facade of a factory and office complex in Hanoi, Vietnam, designed by Studio VDGA for electronics manufacturer Star Engineers.

Studio VDGA designed Star Engineers' factory and administrative buildings, which is longlisted for a Dezeen Award, as a facility that would be pleasant to work at in hot weather.

Facing the road the factory's office wing is wrapped by a double-height concrete envelope supported by large concrete columns.

The lower level houses meeting and conference spaces, while the upper level is a terrace open to the elements.

This large concrete canopy shelters the main building of the complex, which has a large number of shaded external spaces to help workers deal with Hanoi's humid sub-tropical climate.

A facade of perforated metal in different colours prevents the need for blinds or further sun-shading and adds interest, along with planters placed in gaps in the grid.

While the core of the project is a low brick volume housing two vast production areas, the offices directly abutting its eastern edge are a porous cluster of workspaces overlooking internal courtyards. 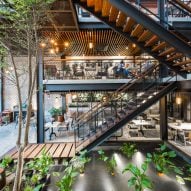 These courtyards are filled with a mixture of paving, plants and large rocks, with a concrete grid above casting a changing pattern of shadows across them throughout the day.

An entrance underneath the large, cantilevering canopy at one end of the facade leads to the office reception desk. The desk sits in front of a textured brick wall, informed by a visit the practice made to a local brick kiln in Hanoi.

This entryway then leads to a loose corridor around which the offices and open spaces are arranged, with glazed partitions to allow for sight lines through spaces and natural light.

"A gaze across the office presents one with the pleasing view of landscape and water instead of the blind partitions and decorative interiors," explained the studio.

The interiors play with the contrast between red brick and concrete, leaving the structure exposed wherever possible.

Where the offices meet the lower volume of factory spaces, the two are separated by a large redbrick wall, with a small pre-factory lobby and sanitisation area sitting before the threshold for those moving between the two facilities.

Two logistic entry points sit at either side of the large production facility, and at its western end another slim wing provides staff facilities.

Although factories often call for simple, shed-like volumes, many architects take them as an opportunity to experiment. In Taiwan, Waterfrom Design recently modernised a 30-year-old factory, adding coloured cladding and translucent glazing.