A "breached monolith" hides a giant light-filled atrium at the heart of this Indian house, which Anagram Architects has completed on a busy street in New Delhi.

Named Cleft House, the four-storey dwelling is designed by Anagram Architects for three generations of the same family that wanted a spacious, light-filled home on a dense site close to their factory.

To achieve this while maintaining their privacy, the local studio built a stark windowless facade that shields the sun-drenched four-storey atrium inside, around which all the rooms are positioned.

"The house is located in a dense residential precinct, on a busy road that feeds an interstate highway and an industrial area. The owners bought this plot as it is within walking distance of their family business and factory," explained project architect Vineet Dhall.

"However, the heavy and loud traffic on the road outside and the desire to continue and enhance their deep intergenerational bonds were the primary concerns our design sought to address," Dhall told Dezeen.

Cleft House's monolithic facade is made from white marble panels mounted on a steel structure. Marble was chosen by Anagram Architects for its "luminescence", which is accentuated with sconce lighting.

These panels continue inside through the slit at the centre of the facade, after which the house is named, before opening up to the skylit atrium.

Intended to echo the central courtyard of traditional Indian homes, the atrium forms the heart of Cleft House, and connects all the communal spaces on the ground floor. 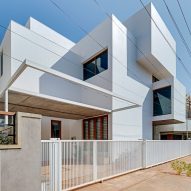 Its size and form also ensures there is ample natural light throughout the house and its basement, while also facilitating natural ventilation.

The bedrooms are all contained within the upper storeys of the dwelling, which are enclosed by faceted walls and glass-lined balconies that visually connect the rooms.

However, to briefly "soften up the rigidity of the faceted geometry", Anagram Architects has also incorporated a grand spiral staircase on one side. Along with the elevator on the opposite side, this provides access to the private spaces.

Each of the bedrooms in the house is complete with bold finishes developed to meet the specific tastes of their occupants.

These offer a contrast from to the more reserved material palette used in atrium and shared spaces, distinguished by black marble, concrete and wooden details, hoped to appeal to all the family members.

"The family consists of a husband and wife, their two teenage sons and the husband's parents," added Dhall.

"The differences in lifestyles, activities and daily routines of the three generations needed to be resolved with the family's desire to stay connected and live together. The design attempts to cater to both."

India is a hotspot for inventive architecture, as demonstrated in Dezeen's round up of 10 strange and beautiful homes from across the country.

Other recent Indian architecture projects include a terracotta school that is modelled on children's scribbles, a proposal for a smart city in Bangalore and a brutalist concrete architecture school.