The sculptural facade of this house in the Indian city of Belgaum comprises staggered blocks containing rooms that extend out from a central plant-filled courtyard.

Padival House was designed by local studio Anahata for a young couple with two children, who wanted a modern home to sit on a site in a typical gridiron residential neighbourhood.

The family's previous home in the coastal city of Mangalore was a traditional villa organised around a courtyard. The architects sought to reprise the feel of this building in the design of the contrastingly contemporary urban house.

"The idea was to create a more pure form of architecture," said Anahata, "of architecture stripped of its non-essentials, reduced only to its basic elements and the feelings that the space itself evokes."

A predominantly closed facade featuring a series of staggered volumes was employed in response to the building's proximity to a busy road.

Each block reflects the layout of the internal programme and results in a multidimensional surface that alters in appearance as the sun passes across it during the day.

"The compound wall is designed to resemble a fabric – very light and absent, keeping the composition undisturbed," said the architects. "The house attempts to stand as a piece of art."

Inside the building, the central courtyard is surrounded by zones that are designated specific functions. On the ground floor, a living space to one side of the entrance lobby flows seamlessly into the dining area.

Ceiling heights that vary throughout this open-plan space correspond to the arrangement of rooms above. A library accommodated on a mezzanine level overlooks the courtyard on one side and the lounge on the other.

A full-height atrium topped with a large rooflight draws natural illumination down through the floors to the courtyard and dining space.

Louvres surrounding this glazed surface and another light well above the stairs cast constantly shifting patterns of light and shadow across the white-painted internal walls.

"Light as a building material is sculpted carefully to define spaces and their functionalities," said Anahata. "As the sunlight changes throughout the day, the shadows make the space dynamic and ever-changing across all seasons."

Clerestory windows throughout the upper levels allow light to enter and create visual connections between the central courtyard and surrounding rooms, including the bedrooms.

A staircase ascending along one side of the building connects the ground floor with a prayer area housed in a box that cantilevers from the facade.

The stairs continue up to the family area containing the library and bedrooms, before finally reaching a barsati at the top of the house.

This traditional small rooftop room with an adjacent verandah acts as a threshold to a large terrace, and can be used as a pantry for serving food and drinks during parties.

Interior details and furnishings characterised by a strong use of colour, line, space and light are influenced by the Indian artist S H Raza. In particular, a decorative stone artwork set into the floor of the living room and the tables with their pyramidal wooden forms evoke one of Raza's paintings.

A concrete ceiling helps to unite the interior spaces, which feature a palette of white plaster, brass, wood and natural stone. 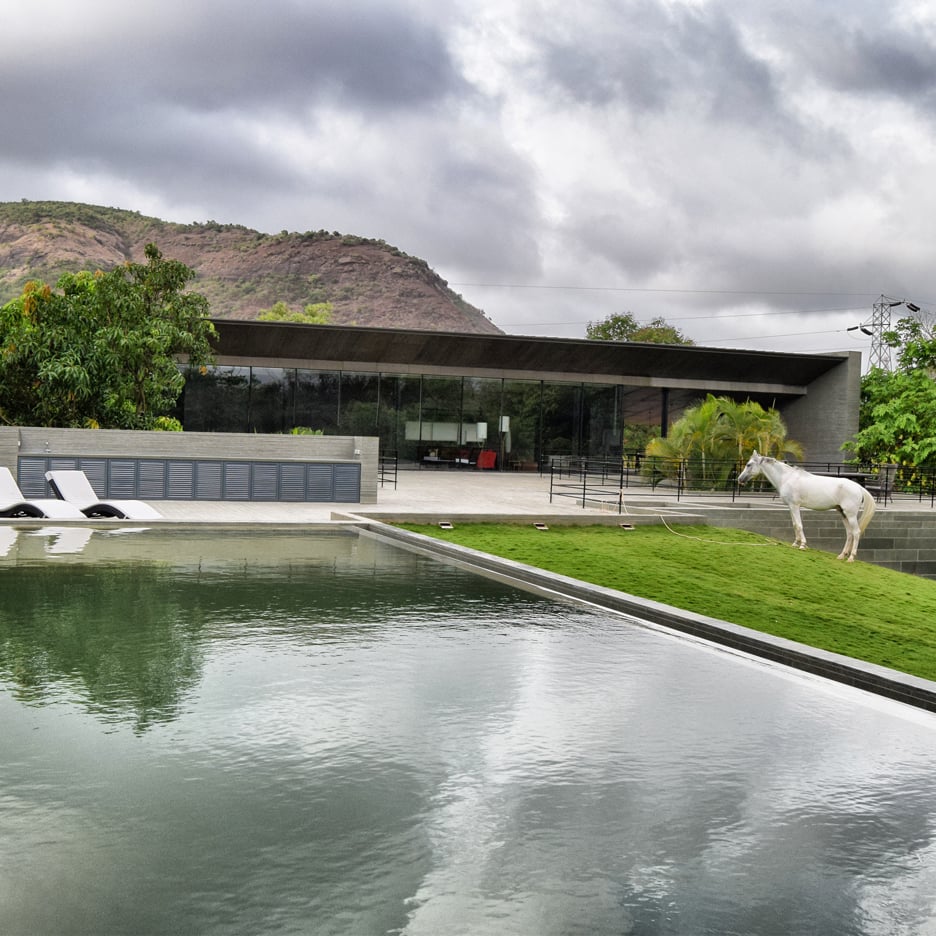