A historic house in Tel Aviv's Neve Tzedek neighbourhood has been transformed into luxury accommodation with a slatted steel addition on top by local firm Bar Orian Architects.

The two-storey structure was built in 1913 as a private home called Gurevitch house. It is one of Tel Aviv's many eclectic-style and Bauhaus buildings that make the Israeli city a UNESCO World Heritage site.

The firm also extended the property, adding a volume to the roof that is wrapped in thin, horizontal strips of steel, with portions forming seamless shutters over windows. An addition was also added to the back to accommodate gardens, balconies and additional rooms.

Bar Orian Architects describes the result as "a unique contrast old and new."

"This is not only an aesthetic decision, but an ideological statement that declares architecture from different periods should be faithful to the spirit and principles of that time period," the firm added. 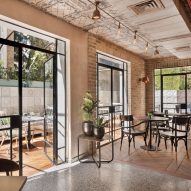 Several differently-designed floors comprise The Levee. A glass-lined level is placed in between the preserved house and the upper extension and is set back to amplify the contrasting designs.

"When I started planning The Levee, I knew I wanted it to represent Tel Aviv in an authentic way," Siso told Dezeen.

"The city's Bauhaus architecture, the smells, people, and the beauty in the crumbling buildings awaiting restoration together with the new, and innovative energy that pulses through the city," she said.

"I knew the design had to have pieces from both of these worlds to be authentic."

Filling the apartments is contemporary furniture from Italian brands such as Molteni and Moroso. In one unit is a blue tufted couch by furniture brand Baxter, a black-and-white photograph by Dor Sharon and an Artemide light.

Other art is by Israeli artist Galit Deutsch, while carpenter Guy Ofer designed cabinets to house televisions. Kitchen cabinets are either black or white, and white drapes soften some of the spaces.

Another apartment features a cream Cassina L-shaped sofa, pink Hay pillows and a light blue carpet by Danish design company Linie Design. Several oversized chairs are by Moooi, and many rugs are by Nanimarquina.

The rooftop penthouse at The Levee comprises a duplex with a glass-contoured bedroom, a bathroom with an open shower and a private terrace. Also in the box-like addition is a unit with a monochrome palette, and two other apartments with more colourful furnishings, two bedrooms and two bathrooms are on the second floor.

Rounding out project are two other suites with balconies on the first floor, and two apartments on the original ground floor. The lower-level units are two storeys and have terraces, English-style courtyards, three bedrooms and four bathrooms. They feature wide staircases and light, neutral palettes to evoke a summer villa.

Over the past decade, Tel Aviv has experienced an increase in the number of design projects and new projects continue to crop up across the city. Another project by Bar Orian Architect is a two-storey concrete house in Tel Aviv with louvres. The firm also built Beersheba's twisting pedestrian bridge with Rokach Ashkenazi Engineers.

Photography is by Sivan Askayo unless stated otherwise.