Israeli architect Anat Gay has combined two properties in Tel Aviv to create her family residence, but kept both entrances for two generations to use separately.

The project was originally designed as two suites, but Gay and her husband decided to move in once it completed. It now accommodates different generations of the family.

"When construction was finished we decided to move into it," she told Dezeen. "The kids live independently, in addition to being next to us. It's like a village inside the city."

The studio left the original floor plans largely the same, while connections between the buildings were made via outdoor spaces dotted across the site.

"While digging underground, we found layers on top of layers of tiles, walls that were built from wood and mud, in addition to kurkar (sandstone) walls that we rehabilitated," Gay said.

The white concrete house is virtually closed off on its front facade, concealing its intimate garden and private spaces behind. The studio planted olive, fig, clementine, and lemon trees, along with herbs, ivy and climbing roses on the site.

Entrances to the two buildings were both retained, and feature charred wood doors that match window shutters.

Through one of the front doors – used by the architects' grown children – is a narrow corridor along a stone wall, which is topped with a glass roof. The rustic aesthetic of this space nods to Neve Tzedek's history as one of the oldest parts of the city. 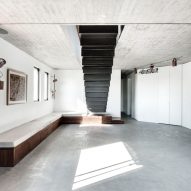 Beyond is an outdoor courtyard with a spiral staircase – giving the house its name – and that leads to a living room, bedroom and a terrace on one side of the upper floor.

The home's main living areas, including a larger lounge and the kitchen, are situated on the other side of the top storey. A small bridge links two balconies to allow movement between them.

The second entrance from the street for the parents conceals a double-height, indoor foyer with a black metal staircase and a skylight. Stairs lead up to the kitchen, with an eating nook overlooking the patio-like space below.

A wooden stepped volume links the kitchen to a living room, as a variation of Japanese stairs. "It is designed that way due to the difference between the levels and a lack of room for regular stairs," said the studio.

A wood-burning stove and fuel for the fire decorate the ground-floor area, where a glass door leads to yet another living room and a bathroom.

The parents' master suite is also accessed from the patio, while a further two bedrooms and another lounge are situated in the children's portion on the same level.

Both inside and out, vines scale walls to create a lush atmosphere, while concrete floors also link outdoor and indoor spaces together.

Greyscale colours feature across furniture and cabinetry, adding a contemporary feel that contrasts with the historic details and planting.

Tel Aviv's historic buildings are gradually being updated and adapted to suit the needs of residents. This is most evident in the nearby Jaffa neighbourhood, where many apartment renovation projects have respected and highlighted the original stone architecture.

Photography is by Yoav Gurin.