Karv One Design created the school as an experimental learning and play space for families at a sales office belonging to property developer Fantasia Holdings.

The 3520-square-metre space is based upon the idea of a children's storybook with curved walls, rounded forms and pastel colours.

The open plan layout comprises eight classrooms in total, a staff office, a music room, a cafe area, a hall/function room, a VIP room, and a display area.

The design, which will be developed into a communal area for the community in the future, has made the shortlist for a 2019 Dezeen Award for best Civic and cultural interior.

"It's the nature of children to play games and embrace wild imaginations," Kyle Chan, chief designer at Karv One Design, told Dezeen.

"With regard to the theme, we hope to bring a beautiful world into children's lives, hence the concept of picture book as our inspiration. The delicately-designed lines, as visual expression elements, became the soul of this design."

The studio said it set out to create an interior that allowed visitors to explore the space in a "relaxed manner" while providing "edu-taiment" features – elements that combine education with play – throughout. 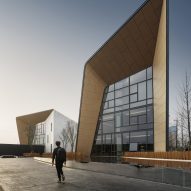 These features include a giant slide and ball pit, a curtain made from thin rolled-up aluminium plates cut with tiny holes and coloured with rainbow-coloured paint, and partition screens made from white metal frameworks.

"Flying is the core idea of the white frame," said Tam. "Fly acts as an encouragement to young children to never stop imagining and believing. The imagination can be abstract and free. The illustrated frameworks were inspired by animals."

Other unusual design features include walls lined with decorative gold hemp ropes in the hall/function room, and a series of powder blue archways that frame the school's toilet cubicles.

"By redefining sales centre in this project, which combines future education and shared community space, we worked with Fantasia Holdings to stimulate new people-to-people and people-to-space interactions from the perspective of space and environmental aesthetics," said Karv One Design.

"This project is so much more than just a school. It is also fertile soil for the public that incubates unlimited possibilities for the future."

Other recently completed contemporary school interiors include American firm Supernormal's design for a nursery and preschool in the Boston area that features sculptural volumes wrapped in vibrant wallpaper and open play areas illuminated by speckled daylight.

Photography is by Dick Liu.