Snøhetta has completed the sustainable Powerhouse Brattørkaia office in Trondheim, Norway, which produces more than double the amount of electricity it consumes daily.

Located on the harbour overlooking Trondheim Fjord, the angular office building is wrapped by 3,000-square-metres of solar panels that provide green energy for itself, neighbouring buildings and city transport.

Architecture studio Snøhetta hopes this will set a new standard for the building industry in light of the climate crisis, without compromising on aesthetics.

"Energy-positive buildings are the buildings of the future. The mantra of the design industry should not be 'form follows function' but 'form follows environment'," said Snøhetta founder Kjetil Trædal Thorsen.

"This means that the design thinking of today should focus on environmental considerations and reducing our footprint first, and have the design follow this premise."

The Powerhouse Brattørkaia office building measures 18,000 square metres, and is connected to the city's train station via a pedestrian bridge on the rear end of the building.

It also houses a cafe and a visitor centre on the ground floor that will be used to educate the public on the building's design and sustainable building strategies for the future.

The building's upper facade and pentagonal-shaped roof are clad with a total of 3,000 square-metres of solar panels.

To ensure these harvest as much solar energy as possible, the form of the building was created by Snøhetta to ensure there is maximum exposure to the sun. This was a challenge for the architects, given the limited daylight hours in its northern location.

"Given the building's location this far north, the harvesting of solar energy is challenging as sunlight varies greatly across the day and seasons. The solar panels produce the most energy when the angle towards the sun is 90 degrees," explained senior architect Andreas Nygaard.

"Thus, in order to harvest enough energy for the building to be net energy positive over its lifespan, the roof needs to be relatively steep – 19 degrees in this case – to be optimised in relation to the angle of the sun," he told Dezeen.

Over a year, these panels generate approximately 500,000 kilowatt hours of clean, renewable energy. The studio is planning to store surplus energy collected in the summer in large batteries for use in the dark winter months.

This means that "the building dually functions as a small power plant in the middle of the city", providing renewable energy to itself, its neighbouring buildings, electric buses, cars and boats via a local micro-grid. 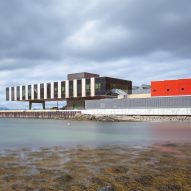 From the outside, Powerhouse Brattørkaia's size is designed to complement the scale of the neighbouring buildings, while its angular form is intended to create the feeling that the "building is bursting with energy".

Its waterfront facade, the slimmest face of the building, is clad with black aluminium and solar panels. On the opposite side, its sloping roof of the building reveals giant circular puncture at its centre.

This forms an atrium at the heart of the building, which doubles as a public garden and light well to feed daylight into the office spaces and the subterranean canteen.

"Taken together, these strategies allow Powerhouse Brattørkaia to consume only about half the amount of energy for lighting than a typical commercial office building of comparable size would," explained the studio.

Other waterside buildings designed by the studio include the Shanghai Grand Opera House and Europe's first underwater restaurant, which is shortlisted in the Interior Design category for the Dezeen Awards 2019.