Chinese practice LUO Studio has designed a glass and metal shed-like structure to provide a temporary home for the Shengli Market in Puyang City, China, while its original site is redeveloped.

LUO Studio designed the market from simple, low-cost and lightweight materials that could be recycled once the market moves out.

The practice drew on designs for industrial sheds and greenhouses built with prefabricated and modular components for its design.

This simple structure of a glazed box supported by steel columns and trusses was refined with a series of custom additions that would facilitate the easy navigation and use of the market space.

"After deciding to adopt an architectural structure resembling industrialised vegetable sheds, the next important step was to create order in the disorderly space by adding some extensions," explained the studio.

"Based on thorough analysis, we added enclosed shops and open shelves to the space, and built and entrance canopy."

A series of square shop units line three of the four edges of the market hall, measuring four metres in width to align with the metal structure's rods.

The two-metre long shelf units, which provide flat space for market sellers fill the centre of the hall, arranged in long strips to create loosely enclosed spaces for the market sellers.

Given that these units were too low to support any signage, the studio designed a series of inverted pyramid structures, or "umbrellas" that sit on the structure's thin steel columns and direct shoppers around the marketplace. 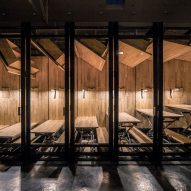 Lighting strips have also been integrated into these umbrella structures to help illuminate the market.

Adjustable fabric coverings on the ceiling help prevent the hall from overheating and on the front facade a protruding canopy has been added, marking the market's entrance and providing a small area of shade.

"All the extensions were built with cheap and easily accessible materials including ordinary timber, lightweight steel panels, cement slabs, steel angles and polycarbonate sheets, which were easy for installation and construction," explained the studio.

Behind the main hall itself, a stand-alone single row of shops houses fish markets, alongside a small toilet block for shoppers.

Once the market moves back to its original site, the studio plans to dismantle the shed and use its components in future projects.

LUO Studio's projects are often concerned with methods of recycling and reuse. In Luotuowan Village, the studio created a pergola using salvaged wood, and in Henan Province designed a real estate sales centre that can be easily adapted or dismantled.

Most recently, the studio has also designed a miniature mobile library for children using an abandoned bicycle.