A trio of buildings with wood and stone-clad walls form this dwelling in Montana by the architecture studio CTA, which was designed to embrace its setting in a verdant valley ringed by trees and mountains.

The Confluence House is located in Whitefish, a small town in northwest Montana, near Glacier National Park. Situated at the convergence of two rivers, the dwelling rests on a 10-acre (four-hectare) site blanketed with grasses and shrubs. A forest surrounds the property.

The full-time residence was designed to blend with the scenic terrain and offer views of the river basin and Rocky Mountains.

"Conceived as a getaway for family and friends, the home's design is derived and influenced by the geophysics of the surrounding landscape – becoming a seamless addition to the natural environment, rather than an interruption," said CTA Architects Engineers, a firm started in 1938 in Billings, Montana.

The living/sleeping dwellings are oriented to align with the river bluffs, and their flat, metal roofs enable the buildings to merge with the horizon line. The utility building, which has a gabled roof with a large photovoltaic array, screens the house from an access road.

Exterior walls are wrapped in dark-stained cedar and stone, both of which were locally sourced. Large windows bring in natural light while providing occupants with dramatic views.

Totalling 2,282 square feet (212 square metres), the main house features an efficient layout that eliminated the need for hallways. This portion of the residence contains a kitchen, dining area and living room, along with a master suite. A study, piano room and mudroom were also incorporated into this wing.

The 946-square-foot (88-square-metre) guest house contains an exercise room and two bedrooms that can be combined to form a family-style suite. Connecting the guest quarters to the main house is a covered porch with a wall-mounted television, which is used for outdoor movie viewing. 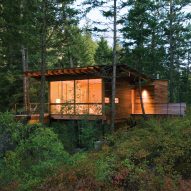 Five of the best houses in Montana on Dezeen

The utility building, which houses a garage and workshop, takes cues from old railway maintenance sheds that dot the region. A breezeway passes through the centre of the building and leads visitors to the central courtyard, where drought-tolerant, native vegetation is meant to mirror the natural landscape.

"A stream bed flows through the courtyard, collecting rainwater that pours onto it from scuppers on the roof," the firm said. "Strategically sited boulders, and plantings of grasses and such perennials as Alberta penstemon and wild bergamot, meld with the surrounding ecosystem."

Inside the residence, the team created a casual and relaxing atmosphere. Floors are made of polished, exposed-aggregate concrete that subtly alludes to the gravel beds in the nearby rivers. Ceilings are wrapped in whitewashed Douglas fir, suggesting the "soft, natural tones of weathered wood".

Spacious, light-filled rooms are adorned with an eclectic array of artwork and simple, contemporary decor.

"Furnishings are comfortable yet durable and contribute to the carefree environment," the studio said.

Other homes in Montana include a compound by Carney Logan Burke (CLB) that consists of rectilinear volumes clad in stone and oxidised steel, and a dwelling by Andersson-Wise Architects that features cordwood walls and a green roof.

Photography is by Karl Neumann.