The founders of architecture studio Barkow Leibinger have created a square-shaped dwelling for themselves in Bozeman, Montana, that features ample use of wood, including cedar siding and glue-laminated timber beams.

The 5280 House is located in the tree-studded foothills of Mount Ellis, near the small city of Bozeman. The 3,200-square-foot (297-square-metre) dwelling rests on a gently sloping site along a creek, in an area with both farmland and suburban housing.

The home serves as a family retreat for Frank Barkow and Regine Leibinger, who started their Berlin-based architecture studio in 1993. Barkow has roots in Montana, and the dwelling sits on five acres that he purchased from his brother.

The studio said the home is for both living and working – the latter made possible by the proliferation of digital technologies and "the new mobility of work", both accelerated by the coronavirus pandemic.

Because the Bozeman area is booming and becoming more densely populated, the architects wanted to ensure the home felt private but not confined.

The house consists of two, L-shaped wings and a flat roof that form a square. The dwelling is built atop a concrete slab that steps down incrementally to conform to the site's grade change.

The wings vary in size, with the larger one containing the foyer, public area, primary bedroom, guest bedrooms and a two-car garage. The smaller volume – which overlooks the creek – holds a design studio, bathroom and sauna.

The wings are positioned around a courtyard that serves as "a common space for the entire house", the team said.

An opening along the east elevation offers a view of the courtyard, which is adorned with aspen trees, river rock and gravel.

The southwestern corner of the house is defined by a retaining wall that provides privacy from a nearby neighbour, while also forming a cosy area to gather outdoors. The team built a fireplace into the wall and added a covered patio.

The dwelling is largely constructed out of wood. Its balloon frame is made of pine lumber, along with glue-laminated roof beams made of Douglas fir. Facades are clad in knotty cedar.

Wood was also used indoors, including smooth larch for window frames and rough-sawn cedar for cabinetry and doors. 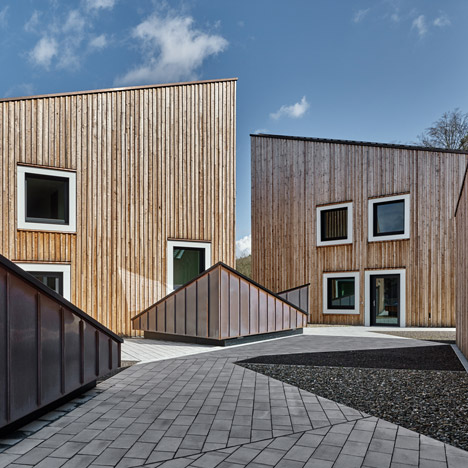 "We opted for on-site and prefabricated timber as the most sustainable material and approach," the studio said.

Other sustainable elements include an energy-saving heating system that enables the owners to warm specific rooms as needed.

The studio described the house as introverted given its courtyard, yet extroverted in regards to its ample glazing and sweeping views. To design the house, the team took influences from not only the landscape, but also the local building stock.

In addition to its barns and ranch houses, the area has a smattering of mid-century architecture, including a Richard Neutra-designed log house with a sod roof, called the Helburn House, and homes by local architects Hugo Eck and Ozzie Berg.

The team also looked to Bozeman's Brick Breeden Fieldhouse, which was among the longest clear-span wooden structures in the world when it was built in 1957.

Other projects by Barkow Leibinger include an arts hub at Harvard University that is covered in polycarbonate panels, and a factory and office building near Chicago that is clad in weathering steel.