Apple's glass Fifth Avenue store in New York City has reopened to the public following a renovation by Foster + Partners that added a spiral staircase, skylights and public plaza.

Apple Fifth Avenue is an underground Apple Store in Manhattan, nestled below a plaza that is in front of Edward Durell Stone's 50-storey General Motors office building. The store was completed by Bohlin Cywinski Jackson in 2006, with an "iconic glass cube" for its entrance overlooking the southeast corner of Central Park.

Before being closed for several years for renovation, it was "one of the most photographed attractions in the city... [and] Steve Jobs' defining symbol for Apple Fifth Avenue," said British architecture firm Foster + Partners, who overhauled the store with Apple and its former chief design officer Jony Ive.

"It's a 100 per cent design collaboration with Jony," Foster + Partners' head of studio Stefan Behling told Dezeen at the store's opening on 19 September.

The team restored the glass cube entrance and much of the store's floorplan below. The main intervention was to dig several feet into the base to create higher ceilings in the subterranean store.

"We decided to dig deeper and make the store higher," Behling said.

Another key addition is 80 skylights that are arranged in a grid across the ceiling and flood the store with natural light. The lightwells are round and identical, and are integrated into a knitted, off-white fabric that creates a tent-like effect.

The ceiling is designed to change in order to match the colour temperature outside. Thousands of LED lights and sensors make the store glow, from a blueish-white in the morning to a more golden tone later in the day. The Fifth Avenue store location is the only Apple Store that is open 24 hours a day and 365 days a year.

Trees are also planted inside to make the store feel in tune with nature. Upholstered benches in a caramel fabric atop a white base surround each tree. 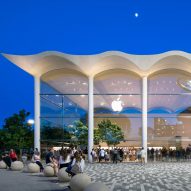 "The whole idea here is that you could make it feel happy, fresh and outside," said Behling.

Another new feature of Apple Fifth Avenue is the redesigned spiral staircase, which Foster + Partners upgraded to suit the new, taller store. A mirrored stainless steel drum features 43 cantilevering steel steps. Bezier curves are created on each step to evoke the shape of Apple products.

At the upper portion of the staircase are mirrored walls and glass that create optical illusions. The staircase also conceals a circular elevator with a glass bottom and top.

Inside the store, walls are clad in a pale grey Italian Castagna stone with varying stripes and rounded corners. The same stone is used at Apple Park in Silicon Valley, which was also designed by Foster + Partners. Floors are off-white terrazzo.

Wood tables and matching storage units provide space for Apple products, including the newly launched iPhone 11 Pro with its three camera lenses. Another section of the store is designed for hosting talks and events.

Apple Fifth Avenue's public plaza was also overhauled to be "easier to use and more accessible," according to Behling. "What is one of the most generous things you can do for society? It is actually to do a civic gesture, that is free and like a really nice present," he said.

"The new [store] design seeks to build on the original idea and create a public plaza that celebrates the vibrant nature of New York City," Ive added.

The stone floor of the public space features 62 lightwells that blend in with the ground, while the remaining 18 skylights are formed as silver orbs. They are for both sitting on and as "public sculptures" that reflect the surrounding New York skyline.

The orbs are called "Skylenses" and have mirrored stainless steel shells with reflective glass tops, allowing light to pour down into the store without being able to see inside. There are nine volumes on either side of the glass entrance, in three rows of three.

Other aspects of the plaza include 28 honey locust trees that are planted symmetrically on the plaza's north and south ends, at 59th Street and 58th Street. Low-lying water fountains and benches round out the space.

Apple Fifth Avenue joins another Apple store by Foster + Partners that is similarly designed around a public outdoor space, Apple at Aventura Mall in Miami.

The firm is also behind several other Apple stores, including Chicago's Apple Michigan Avenue, a store in Macau with a glowing facade and a Tokyo Apple store featuring bamboo.

Photography is by Aaron Hargreaves, courtesy of Foster + Partners.