Audi has revealed its AI:Trail concept car – an all-wheel drive with drones for headlights and other features to enhance the passengers' enjoyment of the outdoors.

The concept vehicle, displayed at last week's Frankfurt Motor Show, showcases what Audi sees as the future of off-road driving.

The partly autonomous, fully electric car's most unusual feature is the five drones it sports instead of conventional headlights.

Called Audi Light Pathfinders, the drones fly autonomously above and around the car to illuminate not just the path ahead but the area on either side.

They dock to the roof or roof rack, and double as cameras to beam video back to the driver if they want to see what's ahead.

The bladeless drones can also assume other configurations –Audi suggests having them group together into a spotlight that escorts the driver safely from the vehicle.

Another of the AI:Trail's headline features is the rear passenger seats, which Audi likens to hammocks.

Made from panels of fabric tensioned across a tubular steel frame, these suspended chairs are designed to be removable, so people can use them for outdoor seating.

"This way, Audi accompanies the driver on his entire trip, whether in the car or on the hiking trail," explained design project manager Oliver Keyerleber.

He said features like this are meant to create "an emotional connection" to the car and to the brand.

"On a quiet path out in nature, the driver finds himself," Keyerleber added. "He can concentrate on whatever is going on around him at precisely that moment. And that makes every trip in the AI:Trail a unique experience."

To facilitate this connection, the vehicle body has large windows that extend down lower than usual, affording more sweeping views. Audi describes it as being "like a helicopter cabin".

The interiors feature natural materials, including wood and wool, and some sustainable choices, such as recycled leather carpets.

The outdoor theming continues with grab handles made from climbing rope and knotted using macramé techniques. 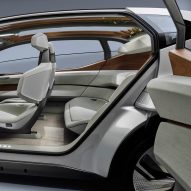 Audi reveals "city car of the future" with living plants

Several outdoors-orientated accessories are removable in the same manner as the hammock chairs. There are water bottles, binoculars and a "Light Companion", which provides ambient lighting when fixed inside the car but serves like a powerful lantern when removed.

One option is to integrate it with the AI:Trail's navigation system and use it to project directional symbols or other information onto a hiking route.

Audi believes these kinds of ultra-specialised design features will make sense in the future, when car ownership decreases but sharing schemes strengthen.

"Unlike the cars of the present, such vehicles will no longer have to compromise between a wide range of uses and scenarios," said Audi. "Instead, it will be possible to design tomorrow's cars for much more specific use cases."

The AI:Trail is the fourth in Audi's series of electric concept cars, each fitting a distinct purpose. Previously, it designed the Aicon for luxury long-distance driving, the AI:Race sports car and, most recently, the AI:ME for autonomous urban travel.

In the future, the German automaker imagines that customers will be able to order any such specialist models from an Audi on-demand vehicle pool.

The AI:Trail has four electric motors and Audi quattro permanent all-wheel drive. It offers autonomous driving on paved roads and forest roads, but not on rough terrain.

The tyres, patterned with bold geometric elements, contain a structure of supporting struts that enhances suspension and improves passenger comfort.

Several automakers presented new designs at the Frankfurt Motor Show, one of the world's major motoring events which took place from 12 - 22 September this year. Volkswagen revealed its first mass-market electric car, the ID.3, as well as a new "flat" logo to go with it.