Volkswagen has scrapped its chrome-effect logo for a flat "digital-first" visual identity to mark the "start of a new era", which has been kickstarted with a line of fully electric cars.

The ID.3 is the first production car in a new generation of fully electric vehicles by Volkswagen, and the first model to bear the company's rebranded logo.

Unveiled at this year's Frankfurt Motor Show, the ID.3 is billed as an affordable option for mass production.

To compliment its latest electric vehicle, Volkswagen wanted to update its visual identity to one that would offer a more modern and holistic brand experience.

The Volkswagen logo, formerly three-dimensional and with a chrome-effect, has been reduced to its basic elements. It now displays a flat, two-dimensional design all in one shade of dark blue.

The new logo, an example of the trend towards flat graphic design, was produced "in the record time of nine months" by the Volkswagen design and marketing team.

Flat graphics eschew three-dimensional effects such as shadows and textures in favour of minimal designs and plain fields of colour.

It was a collaboration between a total of 19 internal teams and 17 external agencies, a factor highlighted by German typographer Erik Spiekermann, who tweeted that although Volkswagen had abandoned the "embarrassing pseudo-chrome look" of its previous logo, the updated version wasn't necessarily an improvement.

"Too bad that the new simplified version wasn't drawn by a good designer," Spiekermann's tweet read. "A type designer would have known what to do, but this was designed be a committee of marketing people."

Good that VW finally ends that embarrassing pseudo-chrome look. Car designer always wanted that. Too bad that the new simplified version wasn’t drawn by a good designer. A typedesigner would have known what to do, but this was designed be a committee of marketing people. #vwlogo

The previous VW logo had remained largely unchanged since 2000, when the company adopted a three-dimensional design with a realistic chrome effect and shaded colours.

This chrome logo will now be replaced by the flatter, more minimal design across the company's vehicles.

Volskwagen is following in the footsteps of brands including automotive marque MINI, which flattened its raised logo four years ago and credit card company Mastercard, which removed the parallel lines from its logo the following year.

The main focus of Volkswagen's chief designer Klaus Bischoff was to make the W "float", in a bid to give the logo a new lightness.

The flatness of the emblem and brand design grants it more flexibility, enabling the company to show it on all devices and applications in all sizes, from the display of a small smart watch to a huge sign on one of the firm's factories.

According to Bischoff, the new logo represents Volkswagen's move into the digital era.

"The ID.3 will bring this new dawn into an electro-digital age onto the road sustainably, with a unique design," he added.

Available with three battery size options, the basic version of the ID.3 car has a 45 kilowatt hour (kWh) battery and has a range of 205 miles, while the largest option has a 77 kWh battery with a range of up to 340 miles.

Earlier this year in May, Volkswagen began pre-booking for a limited launch edition of the vehicle – branded the ID.3 1st – which is equipped with the medium-sized of the model's three battery sizes.

This version has a 58kWh battery that supplies energy to its 150 kilowatt (kW) electric motor, offering a top speed of 100 miles per hour and a range of up to 260 miles. 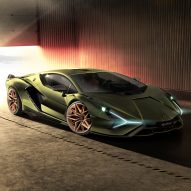 This is similar to Tesla's Model 3, unveiled in 2017 as "the world's first mass-market electric vehicle", which comes with a 220 mile range as standard, with the option to upgrade to a long-range battery with a capacity of 310 miles. Volkswagen plans to start delivering the ID.3 1st to buyers in mid-2020.

"The ID.3 is an all-rounder that is suitable for everyday use," said Silke Bagschik, head of sales and marketing for the ID range.

"It is compact, as such offering the manoeuvrability of a small car with the interior space of a mid-range vehicle," she added. "It combines exciting design with innovative technology and significant range."

Debuted at this year's Frankfurt Motor Show, the new Volkswagen branding and ID.3 car will be accompanied by two more electric Volkswagen models – the latest generation of the e-up! and the current e-Golf.

The ID.3 is the first in a series of ID-branded electric cars, the concepts of which will be showcased at the motor show, including the ID.Crozz SUV, the ID.Buzz van, the ID.Vizzion saloon and the ID.Buggy beach cruiser.