Sea urchins, mussels and crabs are among the marine creatures that are expected to take up residence in a floating structure in the San Francisco Bay that was created by a multidisciplinary team at the California College of the Arts.

The structure – formally called the Buoyant Ecologies Float Lab – is currently moored in Oakland's Middle Harbor Shoreline Park, where it will remain for three years.

Serving as both a research platform and demonstration project, the structure was created by a team of artists, designers and architects from the California College of the Arts (CCA). The project was spearheaded by the university's Architectural Ecologies Lab, which is led by architecture professors Adam Marcus, Margaret Ikeda and Evan Jones.

The diverse team worked in concert with scientists from Benthic Lab and the Moss Landing Marine Laboratories, along with experts at the Port of Oakland.

The Float Lab will test solutions for enhancing marine habitat and alleviating coastal erosion. The floating structure acts as a breakwater, which typically consists of piles of rocks placed alongside a shoreline. Breakwaters help block waves and make the water calmer.

"The Float Lab, a cutting-edge prototype for an ecologically productive floating breakwater, merges expertise from design, advanced digital manufacturing and marine ecology to imagine a new kind of architecture for climate adaptation," the team said in a project description.

The hull is made of ecologically optimised, fibre-reinforced polymer composite and weighs 500 pounds (227 kilograms). Inside the hull are 1,200 pounds (544 kilograms) of concrete ballasts, which help ensure proper buoyancy. 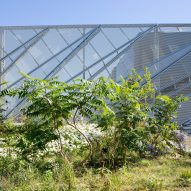 The upper portion has peaks and valleys, allowing tidal pools to form. The underside also has varying topographies to make it suitable for different types of invertebrates. Plankton and other nutrients flow into underwater "fish apartments", helping foster ecological diversity.

"The substrate is designed to create a range of scales of habitats for marine invertebrates, creating small pockets of space that protect smaller creatures from predators," the team said. "This strengthens the food chain and increases biodiversity."

"In large masses, this biological growth can help attenuate wave action and reduce coastal erosion – one of the primary impacts of climate change and sea-level rise," they added.

To help with the formation of tidal pools atop the hull, the structure has a small irrigation pump that collects seawater and channels it to the mounds. The water then trickles down and collects in pools.

"The irrigation pump is on a timer and circulates several minutes every hour during the day," the team continued.

To keep the interior free or water and condensation, the structure has two bilge pumps, which are commonly used on small vessels. The pumps are activated when water is detected by float switches.

The pumps are powered by batteries inside the hull. The batteries, in turn, are charged by solar panels.

The team plans to install monitoring devices in the coming months, including temperature and turbidity sensors.

The Float Lab is the "first prototype of its kind" to receive permits from both federal and local regulators. The project earned approval from the US Army Corps of Engineers and the San Francisco Bay Conservation and Development Commission.

The structure has already won several accolades, including a Catalyst award from the Buckminster Fuller Institute and an Incubator Prize from Columbia University's Graduate School of Architecture, Planning and Preservation.

Other projects that aim to create habitat for marine creatures include the Pier 35 "eco park" in Manhattan by Shop and Ken Smith, which features a rocky beach designed for mussels.

Photography is by Joshua Eufinger, Mike Campos, and the Architectural Ecologies Lab.