Visitors to London's Design Museum have increased 500 per cent since the institution moved to its new home, although the number buying tickets has grown by a more modest 50 per cent.

Since opening in west London last November the museum has attracted 672,000 visitors, meaning it has beaten its target of 650,000 visitors for its first year in just 10 months.

This compares to 115,000 annual visitors to the museum at its former home at Shad Thames in southeast London.

"It's been an amazing response so far," said a spokesperson for the museum. "It's great to beat our year target and still have a couple of months to go before we hit a year in the new building."

However most of the visitors to the new museum – which is now housed inside the former Commonwealth Institute on Kensington High Street, and features a new interior by John Pawson – did not pay to visit exhibitions.

Over half a million people have visited for free

The museum has sold 134,000 tickets since opening, meaning that 538,000 visitors only viewed the entrance lobby and the free exhibitions.

Entry to the museum's vast atrium is free, as is the permanent Designer Maker User exhibition on the top floor, which displays items from the museum's collection.

The move to west London was steered by Deyan Sudjic, who became director of the museum in 2006. Previously the museum was located in a former banana warehouse besides the Thames, which was its home from 1989.

It was originally set in gardens designed by Dame Sylvia Crowe, which have since been redeveloped with apartments buildings by OMA and Allies and Morrison.

New museum is three times bigger than the old one

Pawson's £83 million conversion of the Grade II-star listed landmark gives the museum three times the space it had at its former location. There is now around 10,000 square metres of floor space, linked via a series of stairs and walkways arranged around a triple-height atrium that is designed both to show off the spectacular roof and to host corporate events.

The building received mixed reviews from critics, with the Guardian's Oliver Wainwright saying: "Some of the spaces seem a bit squeezed in around the building's difficult structure, and there are odd moments of feeling like you're in a building-within-a-building." 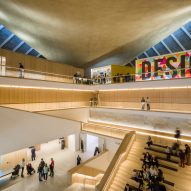 Photography is by Gareth Gardener.