Chilean architect Alejandro Aravena has hollowed the huge tilted volume of this weekend getaway along the Pacific Ocean in Chile to form an opening for a fire inside.

The Pritzker Prize-winning architect, and founder of Chilean studio Elemental, designed the property for a rugged site in Los Vilos, located 250 kilometres north from Santiago. It forms the first in a series of retreats that are planned for the area, as part of a development called Ocho Quebradas, which translates as Eight Ravines.

"We saw the site and the fact of being a weekend house as an opportunity to explore a certain primitiveness," said Elemental in a description.

"The geography was so brutal, that only a strong and manly set of elements was appropriate," it added. "The Pacific Ocean here is not pacific at all; the water is white do to the violence while meeting the earth."

A horizontal concrete volume cantilevers off the edge of the sloped plot ending with a large window to the view, and contains all of the facilities required by a couple. Rising tall behind it is a vertical volume that houses additional guest bedrooms with a terrace on top.

Tilted to rest against the latter, the third volume is hollowed inside to form an opening for a circular fire pit below. Inside the house, the opening punctures down to the floor of the volume underneath to make space for the open fire, with glazing wrapped around it.

"A weekend house is the ultimately retreat where people allow themselves to go back to a more essential living," the team added. "We used the void on the other side of the table – the absence of a client – as an alibi to eliminate the conventions of domestic living, exploring instead the more irreducible dimensions of life."

"We chose to move backwards towards the archaic, not as a nostalgic escape but as a natural filter against the clichés," it continued.

Each block features five poured concrete sides, which are then board-marked. The sixth side is formed from the same would used to imprint the concrete.

"We expect these pieces to age as a stone, acquiring some of the brutality of the place but still being gentle for people to enjoy nature and life in general," said the studio.

A grey wood that matches the concrete also forms a series of shutters that fronts the taller building, as well as partitions inside the 289-square-metre residence.

In the open-plan living area the kitchen cabinets are faced with pale, weathered wood, paired with a white marble dining table.

The glazed fire pit divides the kitchen and the lounge, which is furnished sparingly with an L-shaped sofa and bold artwork that offers a pop of colour. Sliding wooden shutters partition the living room from the adjoining master bedroom. 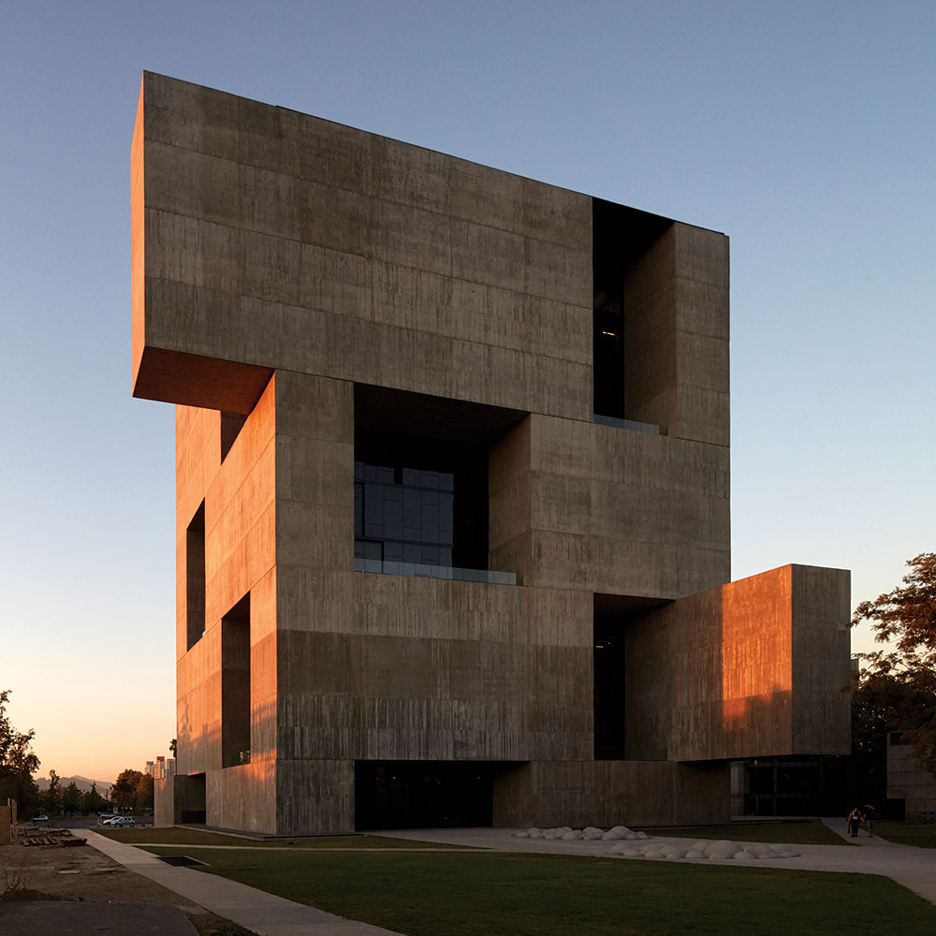 Also on this level, spiral cement staircase is tucked into a nook to lead up the vertical volume, and provides a contrast to another wooden staircase in the property.

The house is complete with an additional three bedrooms, bathrooms and a wine cellar, all of which follow in the minimal aesthetic.

Casa Ocho Quebradas is the first in a series that will be built as part of a private development in Los Vilos. Led by Chilean developer Phillipe Godoy, the project tasks eight Japanese architects and eight Chilean architects build retreats on the rural site, including Kengo Kuma, Sou Fujimoto and Felipe Assadi.

Aravena was awarded the 2016 Pritzker Prize for architecture, and directed the Venice Architecture Biennale in the same year. He set up his practice Alejandro Aravena Architects in 1994 and Elemental in 2011, which is best known for pioneering social housing work.

The simple, monolithic building of Ocho Ochoquebradas follows the aesthetic of a number of works by the studio. Examples include the cube structure of the UC Innovation Center – Anacleto Angelini and a viewing platform in Mexico, which is positioned like a seesaw at its tipping point.