Dutch design collective Envisions has developed a paving strategy for the city of Eindhoven that involves cutting, washing and stamping stones.

Envisions, named Emerging Designer of the Year at Dezeen Awards 2018, has created a series of samples showing how Eindhoven's streetscape could better reflect its identity as a global hub of creativity and innovation.

The Dutch city, home to Design Academy Eindhoven, previously imposed the rule that all paving should be red, yet there were no limitations on style or pattern. As a result, the city's current paving includes a range of incongruous designs.

Designers Iwan Pol, Simone Post, Tijs Gilde, Tomas Dirrix and Sanne Schuurman proposed three methods that could be used to make paving stones more diverse in colour while also allowing them to better complement each other.

"The current paving throughout the city centre lacks unity," explained Schuurman. "There are almost 100 different types of stones, and it appears very fragmented and not thought through at all."

"There should be a stronger protocol put in place for paving and its functions, so that the grounds of the city can consistently represent Eindhoven in the best way," she told Dezeen.

"The current paving references the city only by colour," added Gilde. "We need a more outspoken foundation which showcases our identity, inspires, and complements Eindhoven's progressiveness."

The samples that the team created demonstrate three innovative processes: wash out, cut out and stamp.

Wash out is a process of using water jets to reveal the gravel that is typically hidden inside paving stones. This gives a distinct pattern and texture to the surface of the stone.

Cut out is a method that see's the city's existing stones recycled. It involves creating new stones with voids at their centres, into which the old stones can be placed. 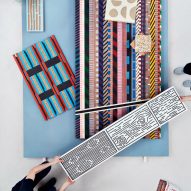 Envisions creates a "diptych" of material experiments for Finsa

Stamp is a technique for imprinting the stones, which creates wave-like patterns in the surface.

"We utilised this opportunity to really dive into and uncover the manufacturing process of concrete stones, maintaining the experimental Envisions way of working by developing an impressive collection of unique samples exploring structure, textures and colour," said Schuurman.

Envisions named the project Stone in Process. But immediately after completing it, the team started work on a followup that they call Stone in Progress.

For this, the designers teamed up with concrete manufacturer Morssinkhof. By looking closely at this company's production processes, they were able to explore how their designs could be applied at an industrial level.

Gilde said this helped them to uncover new ways of working, "instead of just demanding the impossible from the manufacturer". For instance, they learnt that colour lasts significantly longer when it is inherent to the material.

"Placing colour within stones isn't durable," Gilde said. "The pigment in concrete only lasts for around four years, so you have to generate colour through the typical shades of natural gravel materials."

Envisions is a collective of 24 different designers. They share an approach that places a focus on innovative processes, for instance, a previous project saw them create a range of experimental designs in wood.

With this latest project, the emphasis is again on function and practicality, not just aesthetics.

"If you focus too much on making something that looks nice, it can deteriorate quickly," added Gilde. "This balance between functionality and beauty should always be harmonious and consistent."