The fifth annual Medellin Design Week set out to show that Colombia is ready to stop copying and start developing a national design identity.

Medellin Design Week – which Dezeen was media partner for – included a series of talks and workshops organised around the idea of rejecting copying and implementing a strong Colombian design industry.

The theme of the design week, Copias vs Copias, is a play on words, as "copias" translates as "do you copy" in Spanish.

The Esto No es Copia (This is Not a Copy) exhibition at the Click Clack Hotel, for example, showcased the best of young Colombian and Latin American talent.

Colombia's designers have a strategic role to play

Medellin's budding design scene is growing as the city bounces back from the horrors of its recent past.

"Colombia is a country that has been through so many changes in the past few years – and design is one of them," Colombian industrial designer Rodrigo Torres, who spoke at Medellin Design Week, told Dezeen.

At the end of the 1980s Medellin had been cursed with the title of the world's most violent city, as Pablo Escobar's cartel battled paramilitary forces for control of the illegal drugs trade.

After Escobar's execution in 1993 crime began to drop, and between 2003 and 2006 Colombia's government got the rebel groups to agree to mass disarmament.

"We signed the peace treaty with the guerrillas, the country has been improving in so many areas," said Torres. "Owners of companies are coming back to the country because it's safer. That is starting to open a scene that we didn't even dream of before."

As industry has picked back up, business owners have realised that they must compete on the global market against the established design houses of Europe and the manufacturing behemoths of Asia.

Torres himself has returned to his country after 15 years in Milan working for the likes of Alessi, a decision he made out of enthusiasm for the project of rebuilding Colombia with good design.

"For us designers, it means that that we are playing a strategic role in developing the country, in protecting jobs," he said. "We are economic warriors, trying to preserve those jobs for our workers and push the economy up."

Copying is the "cancer of our society"

Rejecting the urge to copy and valuing design, Torres argued, is vital to this project.

"A lot of Columbian owners of companies were copying like it was nothing, like it was the most normal thing on earth, to just go to a furniture fair in Europe or the US and, choose certain products, come back here, and then just copy them," he explained.

"It's the cancer of our society. We learned that we were not capable of creating. This was a terrible thing for us."

Now Torres and his colleagues have vowed to reject unoriginal work and try to bring Colombian craftsmanship to domestic audiences and those abroad.

"We need to start rejecting copying as a normal cultural conduct or as a normal economical conduct," he told Dezeen, after delivering his talk at Medellin Design Week.

"Here in Colombia, and I think in Latin America, by wishing to become someone else we tend to appropriate things, wanting to be the other, wanting to mirror that coloniser," the designer continued.

"But instead, we should look at our own processes and our own realities to construct dialogues that are beyond the copy."

"Design has transformed this city socially"

Colombia's new generation of designers must now turn to the country's rich history of traditional crafts and local materials, those involved in the design week concluded.

"Only by being abroad did I really start being curious about where I was from, revaluing that which I had left behind," said Botero.

"I realised I was missing or needing all those materials that were around me, all that vegetation, all that wealth of fibres and textile techniques."

Every time he returns from Europe, Botero notices how much things have progressed in Medellin. Now that the city is safer, creativity has space to flourish and collaboration is easier.

"Architecture and design has transformed this city socially from the poorest neighbourhood to the biggest neighbourhood, and everywhere in between, he said. "We are less afraid of not only moving [around] but creating things."

Design has been a key part of Medellin's transformation from a cartel-controlled city of fear to a thriving metropolis filled with hipster cafes and boutique hotels.

Public transport redesign has been particularly effective. The Metrocable gondola lift-system opened in 2004. In 2011, orange-roofed escalators connected previously warring neighbourhoods separated by the steep sides of the valley in which Medellin sits. 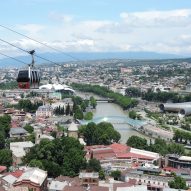 Visitors now flock to the Comuna 13 district to see the graffiti art and children can get to school easily by travelling 384 metres up and down the mountainside in just six minutes.

Colombian design is as yet undefined

Amphitheatre-style concrete steps double as an open-air cinema, and the public park opposite offers a green haven for residents who once avoided open publics spaces for fear of stray bullets.

This cauldron of renewed safety and improved mobility has brought Medellin's design scene to its current level – simmering with creative energy "like bubbling water" as Botero put it.

"We cannot speak yet in terms of what is a Colombian designer," he said.

"The Netherlands had a big process of defining what Dutch design was. But that can also be very restraining; the same happened to Italy," he added.

"We still have the freedom of not calling ourselves Colombian designers. As a generation of Latin American designers, we are very open to progressive ideas, or ideas that help our countries develop."

Historic hardship has given Latin designers an edge

Decades of hardship in their homelands have sharpened the wit and resourcefulness of Latin American designers said Ezequiel Pini, who was born in Buenos Aires but runs his visual design studio Six N Five in Barcelona.

"Having this background is an advantage in those countries where things work well, because we are used to fighting for things, and things not working," said Pini.

"Here, even to cross the street from one side to the other side, there are no traffic lights – you need to cross by yourself," he added.

"We grew up having this in our everyday. In a country where everything works, a small problem would be a big problem for some of the Europeans, but for us – pah!"

Pini misses his family back home in Brazil, but for Latin American designers to find the work they want, the budding design scene needs more support.

"It needs a decision from governments to help and promote designers," he suggested. "Maybe [some incentives] for bosses to hire designers. In Europe there are some benefits for designers and there have been for many years. It's something you have to do to promote that culture of design."

Pressure to provide more support for the burgeoning design scene is coming from outside Colombia as well.

"You need investment in Colombia and in its companies," agreed Roger Swales, founder of Gro Design.

A British designer based in the Netherlands, Swales collaborated with Colombian design company Corona to produce a range of affordable taps.

"Colombians are looking at the social aspects around how cities are developed, and the social structure," he added. "Design cuts across all these fields."

"You can feel the creative energy in the streets"

"I want to change the context of Colombian design worldwide and give opportunities to our talents," Del Valle told Dezeen.

"You can feel the creative energy in the streets, and the desire to show the best through design. We can activate economies, dignify trade, design massive products to optimise resources, we can design and co-create with communities, we can do thousands of good things," he said.

"I believe in Colombian designers because I know them and I know that all we need is that they give us opportunities to show the best of us to the world."

Photography is by Leo Bonilla.