Dutch designers Iris van Daalen and Ruben Thier's The Plastic Mine is a series of home accessories made from plastic clumps gathered from a factory floor.

The Plastic Mine collection includes shelves and tables created out of brightly coloured lumps of polyethylene, with polished, flat top surfaces that feature intricate patterns.

The large chunks of plastic are selected from the waste produced by a factory that makes pipes and tubing for industrial use.

The lumps are created at the beginning of a new production run, when the hot plastic is extruded and gathers in a clump before it begins to flow smoothly.

Thier and van Daalen, who make up Studio Thier&VanDaalen, worked with the factory to create a system that collects and roughly sorts the waste pieces into colour and shape categories before hand-selecting the final pieces to turn into homeware.

"We select the most striking shapes and colours, while at the same time observe as a sculptor what we can make out of it," said van Daalen.

Each piece is processed using a CNC machine or a saw to create a flat surface, before adding the fittings used to mount the final pieces to a wall or to insert legs.

This revealed unexpected patterns inside each of the lumps of plastic, created by the folds in the material as it piles up before solidifying.

"It is such a surprise to find out what is hidden inside, creating an exciting moment when the marbled pattern reveals itself when the two halves split," said the designers.

A development of an early project by Thier, The Plastic Mine was on show at this year's Object Rotterdam, the annual Dutch design fair that took place earlier this month.

Thier first noticed that there was an abundance of waste created in pipe production almost 10 years ago as an intern, but van Daalen said it had taken a long time for people to understand the project.

Recent trends for bright colours had also helped boost interest in the designs, she said.

As well as shelves and small tables, the duo have created vessels, candle holders and mirrors using the same process, although some of these proved too expensive to keep manufacturing while maintaining an affordable price for buyers.

There has been debate about whether designers should focus on recycling plastic or developing new materials, but this has not hampered the creation of a wide variety of products that reuse the material. 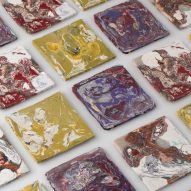 Recent examples include tiles made from single-use packaging, city street furniture made from residents’ rubbish, rugs made from old trainers and a chair created from discarded fishing nets.

"Designers have to make people aware [of waste]," van Daalen told Dezeen. "But waste can also be beautiful. It's a beautiful material, but you have to do good things with it."