Motivated by the severe acute respiratory syndrome (SARS) outbreak in the 2000s, Sum and Kin described their "self-sanitising door handle" as a more effective alternative to current chemical-based cleaning processes.

Comprised of a glass tube with aluminium caps at each end, the door handle is covered in a photocatalytic coating made from a mineral called titanium dioxide, which is ground into a fine powder.

This thin coating on the glass tube is able to decompose bacteria via a chemical reaction that is activated by UV light.

The handle is powered by an internal generator, which converts kinetic energy from the frequent motion of the door opening and closing into light energy, to keep the UV light continuously shining.

The light-sterilisation principle is the same as that at work in the LARQ water bottle, which contains a UV light in the lid.

The two designers were particularly driven by the SARS outbreak of 2003, which infected more than 8,000 people worldwide and caused more than 700 deaths, the majority of them in China and Hong Kong.

"It infected thousands and killed hundreds here, and people started to notice the importance of public health as a result," they said. 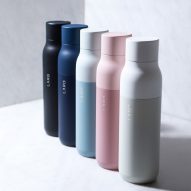 As Sum and Kin explain, public door handles are hotspots for bacteria, particularly on sites like restrooms.

"We knew that many infections can spread out by contact, for example, SARS, MERS, Foot and Mouth Disease and Candida auris," they added.

"Nowadays, people use chemical cleaning materials to clean up public areas, but it is both easy to wipe off and harmful to the human body," said the duo. "Our design has high durability and [is] effective."

The designers' newly developed germ-killing design destroyed around 99.8 per cent of microbes during lab tests.

The self-sanitising door handle was one of the winning entries in the 2019 James Dyson Awards, which recognise the best in student design and engineering around the world.

The design is now under consideration in the final, international round of the competition, where it is up against inventions such as the UK's MarinaTex bioplastic.

In last year's James Dyson Awards, the grand prize winners were the UK team of Nicolas Orellana and Yaseen Noorani, who invented the O-Wind Turbine for cramped urban environments.