Architecture and design collective Edit has designed a vacuum cleaner that requires three people to operate as a feminist thought experiment to draw attention to women's unwaged domestic labour.

Called Gross Domestic Product, the three-way Hoover is currently on display at the Oslo Architecture Triennale.

The vacuum cleaner concept is part of Edit's project Honey I'm Home, which responds to the triennial's theme of the architecture of degrowth.

Because the vacuum cleaner can't be used alone, its design encourages a group of users to share the task of cleaning a room equally. The three nozzles attached to a central body would all need to be used simultaneously for it to be operated successfully.

"We looked into the props that we find in our homes, specifically those designed for domestic labour," Edit member Alberte Lauridsen told Dezeen.

"These tools are also mostly designed to be used privately, and are therefore complicit in the patriarchal system of unpaid reproductive work that happens behind the scenes," she added.

"We want to challenge the rituals that surround these props by making simple tweaks to traditional domestic spaces and objects. The hoover is an example of one scale that could be changed in order to start changing our culture around sharing and reproductive labour."

Edit created the three-way cleaning kit to encourage visitors to the Oslo Architecture Triennale to imagine an "alternate trajectory" where people live more communally and fairly. 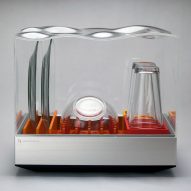 Heatworks shrinks the standard dishwasher to fit inside micro homes

"We have a history of shared kitchens, shared laundrettes and public bath houses as proud civic monuments, which we would like to reference and learn from," said Lauridsen.

Gross Domestic Product (GDP) is the measure of the total value of goods and services produced by a country in a year, but it doesn't account for unwaged domestic labour. According to a recent UK report, women carry out 60 per cent more unpaid work in the house than men do.

GDP is part of a wider economic system founded on infinite growth – something the curators of the Oslo Architecture Triennale are inviting people to question with their programme.

The three-person vacuum cleaner is not the most efficient way to clean a room, which is a part of the point that Edit wanted to make with their project.

"In a world where time is money, saying no to productivity as the most important measure becomes an act of resistance," said Lauridsen.

"So as an alternative to the capitalist assumption that housework is most efficient when performed individually, the hoover can only be used with at least three people."

The designers chose three as a number, not two, because two would be a couple and therefor still symbolic of a nuclear family – the term describing a traditional family of two parents and their children.

"Three is still small enough for it to be easily imagined within its current context, rather than an industrial one, and therefore more useful as an immediate and accessible thought experiment that could be imagined in our homes today."

The Oslo Architecture Triennial opened on the 26th of September and is curated by Interrobang, with chief curators Matthew Dalziel, Phineas Harper, Cecilie Sachs Olsen and Maria Smith.

Other projects responding to the degrowth theme include a bench that is heated by compost and bars of soap with that will be used until it disappears over the course of the festival.