Geometric floor tiles, marble fixtures and flesh-coloured hues appear inside this Aesop store in central London, which has been designed by film director Luca Guadagnino.

The Aesop store is set on the corner of London's Piccadilly Arcade, a covered passageway of luxury shops that includes fine jewellery boutiques, bespoke tailors and small-scale art galleries.

Its opening marks the second time that the director's Milan-based Studio Luca Guadagnino has worked with the skincare brand. Back in October 2018 the studio designed Aesop's Rome outpost, decking it out in roughened stone and rose-coloured marble to echo the materiality of the city's ancient buildings.

"Every one of our stores has a special significance, they're almost like a collection of gems – each of which is quite different and a celebration of the environment that it's in," explained Thomas Buisson, general manager of Aesop Europe.

"[Aesop Piccadilly Arcade] is more luxurious – even though that's not a word that we use often at Aesop – especially in terms of material and the use of space," he told Dezeen.

Boiserie-style panels made from stucco have been stacked up to almost completely fill the store's curved front window.

All the panels have been painted a shade of nude-pink, an attempt by the studio to emulate the tones seen in portrait paintings by the late British artist Lucian Freud.

A huge marble-framed doorway has been punctuated at the centre to form a grandiose entrance that "heralds a change in atmosphere".

Inside, the ground-floor shop area is anchored by two rough chunks of marble, cut from the same block of stone that was used to create fixtures in the Rome store.

One is used as a service counter, while the other has been carved to accommodate storage drawers and a couple of basins where customers can stand to test products.

A majority of surfaces are overlaid with a beige plaster specially mixed by craftsmen in Italy, except a small seating nook which has been upholstered in grey silk.

Textural contrast is also offered by shiny metal shelving that has been integrated into the walls.

Diamond-shaped tiles crafted from travertine marble have then been arranged in concentric circles across the floor so that they appear to "radiate" out from underneath the basin.

The first floor of the store is accessed via a partially hidden stairwell, which has been finished with marble-inlaid steps and a handrail wrapped in mushroom-coloured leather.

Designed to evoke "tender domesticity", this level has been dressed with a grey linen daybed and tea-dyed gauzy curtains that obscure views of the busy London streets below. Floor tiles have also been traded for reclaimed timber boards that have a more homely feel. 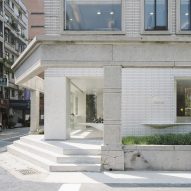 At the centre of the space is a light shaft – customers can look through to see exposed beams from the building's structural framework, or catch a glimpse of other shoppers wandering around on the floor below.

Aesop Piccadilly Arcade is the 16th store that the brand has opened in London – others around the city include one in the affluent Chelsea neighbourhood, which features 12 floor-to-ceiling clay arches and another in Shepherd's Bush where walls are entirely lined in grey felt.