Tucked behind a parade of shops on the King's Road, in Chelsea, Aesop Duke of York Square is part of a luxury shopping area beside the Saatchi Gallery.

A large column set in the centre of the 108-square-metre shop dictated the starting point of the design for Snøhetta's Oslo office.

The team placed 12 arching sections of wall – intentionally reminiscent of the concrete forms used by Oscar Niemeyer – around its edges. The arches splay out across the ceiling and touch the walls, to incorporate the column into the design.

A large disk-shaped sink with a polished stainless-steel top and fibre-glass base wraps around the centre of the column, cementing it as the centre point of the store.

"There is this column, very odd, very strange, and we decided we would surround this column to accentuate it even more," senior architect Peter Girgis told Dezeen.

"Central to the space is this large disk sink, about four and a half metres in diameter, and from that we wanted this column of both light and emulating structure to come and loom," added Girgis, who led the project with architect Gaute Simonsen.

"This large floating sink, the disk shape, the architectural column outstretching – it is a little bit futuristic. Steel details speak of futurism without overbearing."

The curving fins and walls alike are covered in a layer of rose-pigmented clay-based plaster sourced from Devon and Cornwall by Clayworks.

The colouring and texture of the plasterwork was part of the team's desire to "relate back to the body" and create a "soft human feeling" for the skincare brand, according to Girgis.

Aesop's skincare products, which are packaged in brown medicinal-style bottles, are displayed around the taps, while further stock lines the metal shelves and niches on the walls. Islands for gift wrapping and points of sale are stationed in front of one bank of shelving.

"Everything has its clear position," said Girgis. "Everything is designed for each product type."

Aesop Duke of York Square is Snøhetta's first permanent project in the UK, but its seventh store for the skincare brand. One shop by the firm in Singapore is designed as an "upside-down forest", while its store in Oslo is lined in three-dimensional oak panelling.

Aesop was founded in Australia by Dennis Paphitis. He told Dezeen the brand's collaborations with architects and designers are part of an effort to avoid creating a "soulless chain" during an interview in 2012. 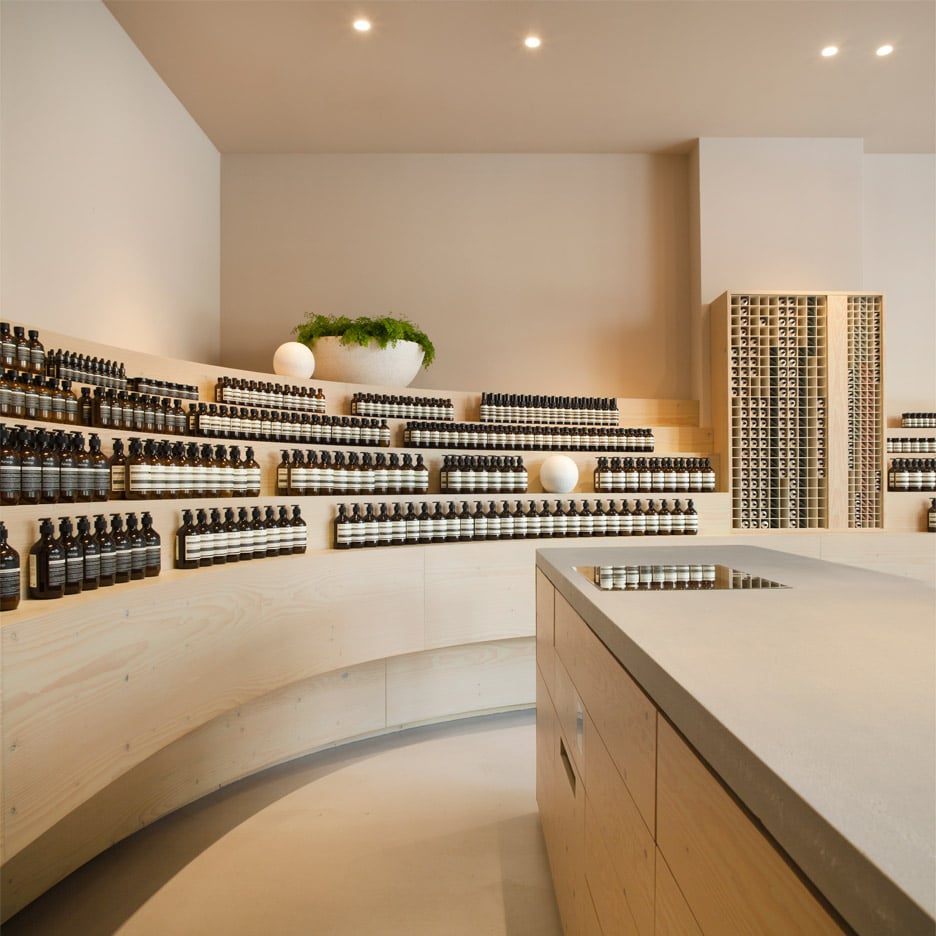 More architecture and design by Snøhetta