Designer Antony Gibbon has visualised a conceptual house called Twine, which sits under a wave-like piece of concrete within a landscape of rolling hills.

Gibbon conceived Twine as a twisting concrete structure, which reflects the hills surrounding as a "series of organic forms".

It takes its name directly from the word Twine, which means to twist strands of material together, or to wind round something.

Gibbon created the rippling twists and curvature of the form to be visually interesting.

"The movement in the shape is measured purely in its form and function, aesthetically as well as practically," he told Dezeen.

The house's living spaces are located within a series of arches beneath the upturned concrete reveals, which are enclosed by glass walls so that they have views out to the hillside landscape.

"Each twist/bend creates the structural support to the ground allowing the internal spaces for the glass walls and interior," explained Gibbon.

The house is divided in two with the lounge and kitchen areas and bedrooms located in arches on either side of a central covered area. This terrace has a sunken amphitheatre-like circular seating area, which faces into a fire pit.

Triangular openings that perforate the concrete in a rip-like manner form the entrances to both parts of the  longitudinal house.

On the roof, Gibbon conceived a terrace with a spa and hot tub, accessed via a staircase from one wing of the house which leads to the central terrace. 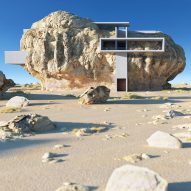 "The space becomes a playground with the architectural spaces formed from the twisting sculptural form," he said.

Gibbon designed Twine as a conceptual house, but hopes that the house could be realised in the future.

"It needs to be situated in the rustic nature to give the balance to the strong form," said the designer.

Known for his projects embedded within natural surroundings, the designer completed a treehouse on stilts in New York, fitted with similarly view-enabling windows and a hot tub.

Wave-like concrete forms can also be seen in Californian skateparks, with scooped out forms and curved canopies photographed by artist Amir Zaki earlier this year.