At a time when everything in the UK looks bleak, an environmentally conscious social housing scheme winning the Stirling Prize is a rare moment of hope, writes Piers Taylor.

Most people inside and outside the United Kingdom will know that it's a pretty rubbish place to live at the moment. The country is in turmoil, and completely divided. The difference between income and housing costs is the greatest it has ever been, and housing design quality and provision are in crisis.

So within this context, it is fitting that Goldsmith Street, this year's Stirling Prize winner, isn't an architectural trinket by a starchitect, but instead, good, ordinary, decent, resilient, low-energy housing that we can imagine much more of.

This stands in stark contrast to the state of current housing in the UK. The gap between average income and average house prices has changed between 1985 and 2015 from twice an average salary to up to six times average income. In London, the median house price is now up to 12 times the median London salary.

With this, the quality of private rented accommodation is extremely low and the cost extremely high, and the provision of social housing – until very recently – at an all time low. Any notion in the UK of a benign welfare state has disappeared completely, and the government's house-building programmes are almost non-existent.

Amazingly, it wasn't always thus. After the second world war, until the end of the 1970s, we had an enormous state-funded housing programme that ceased almost overnight when Margaret Thatcher came to power in 1979. Up until that point, nearly 50 per cent of the country lived in council housing. Now, it is approximately eight per cent. Much of that council housing was built to extremely high space standards and offered a vision of a better future for many. 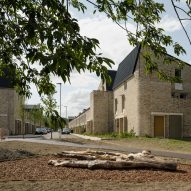 The housebuilders had two aims: build them cheaply, and maximise profit. One developer told me recently: "Our only responsibility is to our shareholders. Why would we invest anything in design when – due to the housing shortage – any old crap sells."

Given that housebuilders have ruined much of the UK, it is easy to forget that housing is not only potentially an enormous force for good but has historically provided in Britain some of the best urban infrastructure in the world; its 18th- and 19th-century terraces, streets and squares still form the backbone to much of our cities, towns and villages.

For some time, the Stirling Prize has been business as usual in rewarding trophy architecture by establishment practices for establishment institutions

Good housing isn't really about architecture in the way that many use the term to describe individual buildings: the infrastructure that works in the UK is a model of simple, robust and versatile urbanism which can be adapted and changed over time – unlike almost all housing built in the last 40 years.

Recently, however, things have begun to change. Local authorities have started to build again, and we have once more seen excellent examples of social housing in the UK with the work of Peter Barber and others.

Which brings us, naturally, to this year's RIBA Stirling Prize. For some time, the Stirling Prize, with the exception of DRMM's Hastings Pier, has been business as usual in rewarding trophy architecture by establishment practices for establishment institutions.

Never has this been more obvious than last year's winner, when the ultimate power couple Norman Foster and Michael Bloomberg proved that money buys… quite a lot. Absurdly promoted as the "world's most sustainable office building" the Bloomberg HQ involved a staggeringly large amount of resources shipped from around the world to build it.

If ever it felt like the Stirling had finally become meaningless, it was last year. It was a two-fingered salute to a country in crisis, saying that only London counted, only old white guys mattered, and big bucks rule the world.

And so, how fantastic that this year's Stirling Prize has been awarded to the 105-house Goldsmith Street development in Norwich by Mikhail Riches with Cathy Hawley. Rather than merely virtue signalling, as one architecture pundit rather sourly claimed on Twitter, Goldsmith Street won because it was the best scheme, and, in opposition to Foster's Bloomberg, one where the architects had extracted the most with the least. 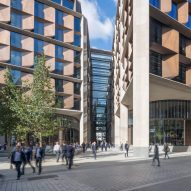 The whole country breathed a sigh of relief that the prize didn't go to an "iconic" piece of architecture in a time where more than anything we don't need more iconic buildings. It went instead to a clever, yet ordinary, council housing scheme in the provinces, built for a modest budget that was a fraction of the cost of last year's winner.

Not only is the scheme a delight by anyone's standards, it also offers a roadmap for precisely the type of housing the UK needs huge amounts of. Goldsmith Street doesn't, thankfully, reinvent the housing wheel, and it doesn't need to. The last thing housing needs is novelty. It simply continues in the tradition of terrace housing as building blocks of communities.

Goldsmith Street doesn't, thankfully, reinvent the housing wheel, and it doesn't need to. The last thing housing needs is novelty

Yet, Goldsmith Street's relative straightforwardness belies how clever the architects have been to get so much to work so well. Beautifully resilient, one can imagine it being there for hundreds of years getting better and better over time, as it is lived in by generations of ordinary people, and changed, adapted and updated as necessary.

In a culture where most private housebuilders cynically build the worst dross imaginable and consider Building Regulations Stalinesque constraints on their free-market profiteering, that Goldsmith Street is also super energy-efficient and conforms to Passivhaus standards is nothing short of remarkable.

As the United Kingdom tears itself apart politically and socially, and in a climate when it is hard to believe in any kind of positive future for the country, most architecture seems pretty much irrelevant.

However, Goldsmith Street offers an incredible and uplifting vision for how things could be in the future in the UK if there was the political will. Just for a minute, Goldsmith Street winning the Stirling Prize allows us to hope that this might precipitate change, and things might just get better. We can but dream.

Piers Taylor is the founder of architecture practice Invisible Studio, an inaugural studio master at the AA for the Design & Make Programme, a former Design Fellow at the University of Cambridge, an anniversary scholarship PhD Candidate at the University of Reading, and an external examiner at the Arts University, Bournemouth and the Convenor of Studio in the Woods. He has presented several architecture shows on television including BBC programmes The House that £100k Built and The World's Most Extraordinary Homes.
Photography is by Tim Crocker.
Read more: