Art and design duo the Haas Brothers has revealed a series of otherworldly sculptures with tentacle or fur-like outgrowths that are the result of porcelain being built up with thousands of brushstrokes.

A menagerie of more than 45 of the bulbous, rainbow-coloured objects – some with golden trunks and antennae like deep-sea creatures – were made especially for the Frieze Art Fair in London.

At up to a metre tall, the pieces include some of the largest created so far as part of the studio's ongoing Accretion series, which is named after the production technique used to create it.

It was especially developed by the twins, Nikolai and Simon Haas, to mimics the natural, almost sedimentary growth patterns of stony corals or tree fungi, which are built up gradually, layer by layer.

"Any physical process repeated identically in the long-term will yield a form," Simon Haas told Dezeen. "Take the dip that forms in worn-down stone stairs, or the various cave formations whose shapes are determined by what surfaces water drips onto or off of."

"So I wanted to see what would happen if I brushed wet clay onto drier clay over and over and over, and that's how accretion was born," he continued.

This process is applied to a clay sculpture, which is first scored to create a hold for the porcelain slip, and then left to dry half way through the process.

After that, several rounds of the porcelain are applied, with each layer adding about 0.1 millimetre in length to the extensions.

"We create coloured gradients using custom clay slips and brush the porcelain from bottom to top onto the sculpture. We let it dry slightly from time to time before adding the next layer," explained Haas.

For some pieces, it can take up to a month to apply between five- and ten-thousand individual brush strokes which ultimately accumulate to form the accretions. 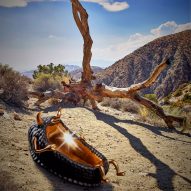 Then, they go through a three-part firing process. For the larger creations, the workshop's kiln needs to be dismantled and then re-built around the sculpture for each firing.

In between the rounds, a clear glaze is applied to each piece and for some, the tip of each tentacle is brushed with gold lustre.

"Accretions are all about a mix of delicate and slightly gnarly, irresistibly touchable yet too fragile to touch, evocative of something functional but impossible to use," said Haas.

"The gold adds a delicacy that just makes their visual presence that much more impactful. We use either a Japanese ready-made lustre, or one from Germany that is pure gold suspended in an oily solution, which fires to a shiny gold film."

The sibling duo prides itself on blurring the boundary between art and design, with previous projects including a homeware collection reminiscent of fantastical creatures and a series of sculpture-cum-furniture pieces, exhibited in The Bass museum in Miami Beach.

This latest collection is no different, explains Haas: "Some of the pieces share a bit of formal language with more functional ceramics. But that's because we feel that hinting at functionality, and using design tropes on objects that are so incredibly un-useable, creates an interesting kind of tension."