Mexican firm Santos Bolivar Architects has given the red-block buildings that form this inn reflective bottoms to make it seem like they are floating above the arid landscape in Valle de Guadalupe.

Santulan Bed & Breakfast is located in Guadalupe, a small town in Mexico's Baja California province. The area's warm climate, proximity to the coast, and abundance of vineyards make it a popular vacation destination.

The red blocks that form the walls of the main buildings are made of ecoblock, a material similar to brick, that was made on site by the construction team.

"The ecoblock is a mixture of clay and earth from the place, the result from excavation of some areas of the foundation," architect and studio co-founder Jose Antonio de los Santos Bolivar told Dezeen.

"The proportions used were 70 per cent earth, 25 per cent clay, five per cent cement, and water to moisten the mixture," he added. "Once these materials were mixed, the mixture is compressed by means of a manual hydraulic press to finally produce the ecoblock."

Additionally, the buildings are raised above grade, which improves soil permeability, according to Santos Bolivar. The gap between the walls and the ground is wrapped in a reflective aluminium finish, which is meant to mirror the landscape surrounding the project.

"The finality of its design is to amplify and modify the landscape and generate the optical illusion of the building being elevated, giving continuity to the mountains and land without a major building interruption," Santos Bolivar told Dezeen. 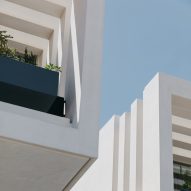 Santos Bolivar Architects, a studio based in nearby city Ensenada Baja, wanted to avoid the typical organisation of a hotel, where all programme functions are combined into the same building.

Instead, the architects wanted to take advantage of the flat, open site to create a network of buildings connected by footpaths. "We made the decision to project its architectural programme in different buildings interconnected by means of walkways that interact directly with nature," said the firm.

Visitors first enter a reception building that the architects describe as the heart of the project. In plan, it is roughly V-shaped, and encloses a courtyard between its two wings.

One of these contains the lobby, reception, as well as services spaces for the establishment's staff, while the other is an open-plan lounge for guests with generous views of the landscape. Here, there is a communal living area next to a shared kitchen and dining room, as a way of  "developing interaction and coexistence among guests".

On the site itself, a triangular pool at the centre helps organise the paths within the compound. The main walkway runs next to this pool and connects the reception to the hotel's rooms.

The guest suites are housed in a long rectangular building that faces East. "The main building is a horizontal volume that blends with its landscape surrounded by hills of the valley and which has an orientation referenced to a majestic mountain," Santos Bolivar Architects added.

Each room enjoys a covered terrace overlooking the landscape, accessed through sliding glass doors. An opening cut through the building contains a small courtyard, and a staircase leading to the building's green roof.

The rooftop is topped with native plants that the team sourced in order to "reduce water consumption and excessive garden maintenance".

The compound also includes a yoga studio, and a meditation space housed a geodesic dome near the guest rooms. This partially sunken building has an exposed wooden structure that allows light to filter in, while blocking out noise from outside.

Other recent projects on Mexico's Baja Peninsula include a minimalist white beach house in Cabo San Lucas by Gloria Cortina and studio Gomez de Tuddo Arquitectos, and a resort comprised of stacked volumes leading down to the ocean by Sordo Madaleno Arquitectos.