Tech-savvy hotel company Life House has designed its newest property in Collins Park as an homage to Miami's past as a Quaker stronghold.

The boutique brand, whose philosophy celebrates neighbourhood identity and heritage, garnered significant buzz after the opening of Life House Little Havana, which debuted a bespoke digital platform for guests to use like a social network.

Life House Collins Park, the latest outpost, sits inside a streamline moderne building constructed in 1934. The movement, a pared-down offshoot of art deco style, had gained popularity in Miami in the decades after the Great Depression.

Life House's in-house design team aligned the "restrained" exterior aesthetic with the Quaker ethos of purity and functionality, layering a design narrative that served as a holistic reflection of the locale.

"We found the Quaker angle a refreshing take on the typical South Beach scene, which is often flashy and excessive," founder and CEO Rami Zeidan told Dezeen. "Quaker design celebrates similar values to our own in the context of our Streamline Deco Historic Building."

The Collins Park outpost is located between the beach and the Collins Canal, a feat of engineering from 1912 that revolutionised development on Miami Beach.

The waterway was created by John Collins, the ambitious Quaker merchant credited for populating the barrier island with sustainable farming practices and trade. 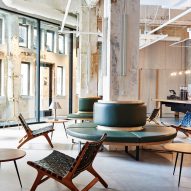 "We have a saying internally that ‘research is what differentiates the dilettante from the artist'...that without this granular research and discovery of places, things, stories, become superficially characterised or overly homogenised," Zeidan continued.

Within the 52 guest rooms, custom walnut millwork, macrame and handwoven tapestry produced by local artisans hang on deep sea blue pegs – a creative nod to iconic space-saving Shaker chair rails. They also feature photos by Russel Harvey, a local who has been shooting the neighbourhood since the 1990's.

In the public spaces, vintage high back armchairs flank a pair of creme vintage Vladimir Kagan sofas and Shaker-style barstools.

The Living Room "gallery" is populated by bespoke illustrations by Mike Wilcox and 1970's-era photography of South Beach from Andy Sweet.

"We pride ourselves in being responsive to not only the neighbourhood and history, but to the real estate," said Zeidan.

"There are so many historic hotels that have the entire story right there waiting to be told, but have been misappropriated by real estate developers looking for a quick profit or an ego trip."

Zeidan's own heritage shows up at Mama Joon, the hotel's canalside restaurant which highlights Mediterranean homestyle cuisine with a particular influence from Lebanon.

"My dad grew up on a farm in Lebanon, and so much about our home-cooked meals is about the simplicity of the dishes and freshness of the ingredients," he said. "That idea directly correlates to the spirit of our design narrative of a merchant's residence and Quaker minimalism".

Guests at Life House Collins Park also have access to the bespoke social network, which allows them to book rooms, check-in and other features, such as linking them up with other travellers. Chicago hotel The Hollander also offers guests a connection service via Instagram rather than is own network.