As Poland goes to the polls on Sunday, the churches that were built in the 1970s and 1980s as a sanctuary against an oppressive state are now instruments in a political debate, writes Owen Hatherley.

Between 2010 and 2015, I lived part of each year in Poland. I rented a flat in London, my partner owned a flat in Warsaw, so I had the luxury of immersing myself in a new country while always able to leave whenever I wanted, thanks to the budget airlines that were used as a commuting shuttle by thousands of Poles. Never quite mastering the language, I'd let my eye be caught by things – a neon sign, a mural, a building. The buildings that caught my eye most were the extraordinary 1980s mega-churches that dominated every housing estate.

Poland goes to the polls on Sunday, and it's those Catholic churches I think of when I think about the choices the country faces. They have become the site of political propaganda for the Law and Justice party. The pulpits of these magnificent churches have become the platform from which the party rails against what it sees as Poland's social ills.

I lived in the southern suburbs of Warsaw, at almost the exact point where the pre-war city grid suddenly breaks up and is replaced with spaced-out housing estates of prefabricated blocks, most of them built in "People's Poland" in the 1970s, during an economic boom that ended in a political and economic crisis. I watched as these blocks were renovated with pastel colour schemes, which harmonised with the changing colours of the leaves of the trees in the abundant green spaces.

The icons on the skylines of each estate were always the churches – huge, craggy and monumental

Sometimes you'd still see the small 19th-century manor houses that predated the estates. It was these, not the concrete and pastel towers and slabs, that were derelict or being demolished for new, much more dense high-rise estates with aspirational names. A one-line Metro built in the 1980s went between the nodes of this enormous city-within-a-city.

The icons on the skylines of each estate were always the churches – huge, craggy and monumental. Whether in Stegny or in Ursynów, they would be the centrepiece around which the estates revolved, always full to bursting on Sundays. They were all in a syncretic style I had never seen before – the cantilever theatrics of constructivism, the heroic scale of brutalism, the warm and rugged brickwork of Hanseatic gothic, the decontextualised historic fragments of postmodernism. All could be found there, often at once. 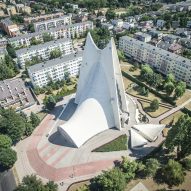 My partner at the time raised an eyebrow at the enthusiasm of a western leftist for the churches she'd been raised and confirmed in, and avoided ever since. But the fact is that these are some of the most unforgettable architectural experiences I have ever had.

Near the top of my personal canon of 20th-century architecture are fusions of art, space and construction such as Our Lady Queen of Poland in Nowa Huta, a new town built outside Kraków as a socialist showcase, initially without a church; after much lobbying and, eventually, riots, it made this its centrepiece, a barrel-like ark, with the scale of the best brutalist public buildings and an ethic of care where even the tiniest pebble of detail has been thought about and crafted.

Or the Church of the Holy Cross and Our Lady Healer of the Sick in Katowice, by Henryk Buszko and Aleksander Franta, which stood as the focus of a housing estate of cylindrical towers by the same architects, and followed the shapes but not the materials of the blocks, giving a sense of serene cyclicality and order.

When I first saw these, I would try not to think about the anti-semitic imagery on the murals and the lurid anti-abortion posters at the doorways. The people who built the gothic cathedrals weren't woke either, I could tell myself.

The Law and Justice party now faces re-election, and the churches have been their foremost propagandists

Architects tended to ignore these churches – all I had to go on to explain them was what I would find in second-hand bookshops. It was in the Day VII Architecture project, first presented at the 2014 Venice Architecture Biennale, where I learned their history.

The story was much more interesting than I had realised. Church-building was verboten under the vicious Stalinist government that ruled Poland between 1948 and 1956. After that, things relaxed and they became legal again, but the deluge came in the 1980s.

The researchers behind Day VII Architecture – which is now available as an English-language book, by Izabela Cichonska, Karolina Popera and Kuba Snopek – consider these churches to be "Solidarity architecture". The church-building was spurred both by the Archbishop of Krakow, Karol Wojtyla, who became Pope in 1978, and by the emergence of the free-trade union Solidarity in 1980 – itself a syncretic mix of Catholic, socialist, liberal and nationalist currents – before it was suppressed with tanks at the end of 1981.

After that, the state granted hundreds of building permits, but an economic crisis meant the churches often had to be constructed via volunteer labour (on the "seventh day"), donated materials, and enthusiasm from parishioners. This was combined with energetic designs by architects who had benefited from a sophisticated architectural education system but were then expected to do little more than arrange concrete panels around trees.

In the drone photographs included in Day VII Architecture, these buildings look like the dream-projects of the Expressionists of the 1910s, akin to the "City Crown" or "Alpine Architecture" of Bruno Taut. But whereas those great community halls were meant to replace churches in a new, secular socialist world, these were, well, churches.

These buildings are now incubators of a paranoid cult

As the relationship I was in broke-up at the end of 2015, there was an election – which I didn't vote in – where Civic Platform, the rather cynical but efficient conservatives who had run the country for an unprecedented two terms, lost heavily to Law and Justice, a theocratic, nationalist party (though both parties have roots in Solidarity's 1990s electoral arm). They packed the courts, took over the media, re-ran the museums, and, crucially, rebuilt some of the welfare state that their predecessors had destroyed.

Now, the Law and Justice party faces re-election in Poland, and the churches have been their foremost propagandists. Many churches have reportedly threatened parishioners, telling them that they can't both be devout Polish Catholics and vote for liberals or the left. 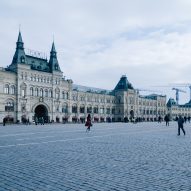 "Dictatorship in the 21st century looks like London or New York"

An official crusade against LGBT rights is reportedly preached in churches, which have also been accused of encouraging Islamophobia, antisemitism and anti-migrant sentiment. From being a sanctuary against an oppressive state in the 1980s, these buildings are now incubators of a paranoid cult.

What can their architecture tell us about this? One of the important aspects of the "Day VII" churches of the 1980s is that they did not happen in a capitalist system. They were built in the interstices of a planned economy, using a politically discontented but fundamentally secure population's abundant spare time. Most importantly, these churches provided an alternative community and solidarity to the state's official community and solidarity, which was rejected by many as hypocritical and inauthentic.

The state said that it was the state of all the people working together, men and women, workers and intelligentsia, irrespective of money or gain, towards a common goal – well, there was at least one place where this was true: in the building of these churches. Then society's values shifted, and the shock in that capitalist "shock therapy" still reverberates.

The majority of people in Poland live in these estates, and a majority of them worship in these churches. It's a landscape I love, but it can be desolate and unforgiving – the wind lashing through highways lined with malls, empty spaces, xenophobic football graffiti on any taggable surface, minimal crime but thousands of gated communities, everyone white, everyone straight – a country that has dedicated itself so much to becoming 'normal' that it punishes even the prospect of deviancy.

The architects of "People's Poland" understood better than the Party what Marx really meant when he called religion the "opium of the people". These churches are, as they were when they were built, "the sigh of the oppressed creature, the heart of a heartless world, the soul of soulless conditions".

Main image is of Church of Our Lady Queen of Peace by Igor Snopek.