The 3,000 hugely varied churches built in Poland between 1945 and 1989 were often created as a rejection of communist authority. Kuba Snopek, co-author of Day-VII Architecture, picks five of the most intriguing.

Following the second world war, predominately Roman Catholic Poland was under socialist, secular rule and largely cut off from the Vatican. This lead to a wealth of unique churches being built in the country.

"In my opinion, Day-VII Architecture – Catholic churches built in socialist Poland – are the most original Polish contribution to the world's architecture in the 20th century," Snopek told Dezeen.

Snopek along with Izabela Cichonska, Karolina Popera has documented 100 of the more than 3,000 churches built in this period in their book Day-VII Architecture A Catalogue of Polish Churches post 1945.

"This architecture was very strongly influenced by geopolitics," explained Snopek.

"After world war two, Poland became part of the atheist communist bloc, although the Polish society was majority religious. This incoherency produced a series of paradoxes."

As the construction of churches was not supported by the government the use of state machinery and materials was not allowed. This meant that each of the churches was funded, designed and built locally – often on a Sunday, which is why the churches are referred to as Day-VII Architecture.

"Although the vast majority of these churches were given formal building permits, there were other obstacles, which needed to be bypassed: lack of materials and machinery, intentional bureaucratic obstruction, etc," said Snopek.

"This strongly impacted architecture: at the peak of industrialisation of construction, churches were built in very traditional ways." 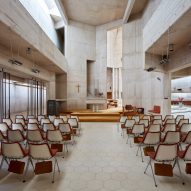 Thousands of the churches that were built in Poland in the communist era were designed after the Second Vatican Council, which redetermined many of the Catholic Church's core ideals and had a giant impact of church design.

Cut off from these global changes, the architects of Polish churches were left to interpret these changes in their own unique way.

"The Second Vatican Council revolutionised liturgy, which in turn strongly affected architecture. But the changes were not communicated to architects directly – they were simply a consequence of the changes in liturgy," explained Snopek.

"Communication between the Polish Episcopate and the Vatican was inhibited due to the existence of the Iron Curtain. As a result, the postulates of the Second Vatican Council were often interpreted locally resulting with unexpected solutions.," he continued.

Read on for Snopek's pick of the most interesting of Poland's communist-era churches.

Church of the Holy Spirit, 1982, Tychy, by Stanisław Niemczyk

"This church has one of the most original interiors I've ever seen. Its architect, Stanisław Niemczyk, used light, warm materials and the form of the plan to shape the space according to the requirements of the Second Vatican Council.

"His work was complemented by the paintings of Jerzy Nowosielski – an artist, whose sacral works were greatly inspired by the aesthetics of orthodox icons. Together, they have created a really unique sacral atmosphere."

Church of the Divine Mercy, 1989, Kalisz, by Jerzy Kuźmienko and Aleksander Fajans

"This church wouldn't have been built, if not for collaboration between the parishioners and a team of mathematicians.

"The geometry of this building is based on hypars (or hyperbolic paraboloids) — shapes, which are complex and difficult to calculate. But once the calculations are done, it's possible to build hypars using very primitive building techniques.

Church of Our Lady Queen of Peace, 1994, Wrocław, by Wojciech Jarząbek, Jan Matkowski and Wacław Hryniewicz

"I love this example, because its architecture expresses an inter-generational collaboration. At the time, when they designed it, the architects were very young, around 30. On the construction site they met old and experienced masonry masters.

"This inter-generational cooperation resulted in an original Japan-inspired postmodern form (the most cutting-edge style in the early 1980s), complemented with amazing stone- and brick-work (the contribution of the old masters)."

"This church is very postmodern in spirit. On the first sight, its architecture seems to lack logic, but after a longer inquiry it starts to make sense.

"The main aisle, for example, is surrounded by two rows of columns, which don't support anything – their bases had been cut, so that they levitate above ground. It actually makes perfect sense: one of the main requirements of the Second Vatican Council was to ensure good visibility in the interior."

Church of the Holy Cross and Our Lady Healer of the Sick, 1993, Katowice, by Henryk Buszko and Aleksander Franta

"I always show the aerial photo of this church during my presentations. The visual difference between the church and the housing estate surrounding it is evident.

"Interestingly, both the church and the housing estate were designed by the same pair of architects and built at approximately the same time. The visual difference comes from the fact that Poland in the 1970s/1980s had two parallel architectures.

"Housing estates were created by the state in a fully industrialised way, while the churches were built by parishioners from locally sourced materials."

Photography is by Igor Snopek and Maciej Lulko.