Folding screens of woven steel surround the upper level of the latest building at the Gerrit Rietveld Academie, which provides three storeys of exhibition, workshop and teaching spaces.

The building, which will be used by the Gerrit Rietveld Academie and Sandberg Institute, was designed by  multidisciplinary design team Federation Levitation (FedLev) led by architect Paulien Bremmer, working in collaboration with local practice Hootsmans Architects.

The latest block is located opposite the independent university's main building designed by Gerrit Rietveld himself and connected by a bridge to a tower block designed by Benthem & Crouwel in the early 2000s.

The design focused on ideas of community and interdisciplinarity that Bremmer felt were underserved by the existing building on campus.

"Experimentation is key at the academy. This essentially means looking across borders and disciplines," said Bremmer.

"The autonomous departmental culture of the academy didn't contribute enough to an interdisciplinary way of working."

As a result, the ground floor of the building centres around a shared atrium-like space that weaves between classrooms that have been pushed to the edges of the plan.

With a simple concrete frame structure, corridors and isolated stairwells have been avoided entirely, with spaces arranged around concrete columns and separated by glazed partitions. A glazed facade wraps around the entire lower level, above which the first floor cantilevers out.

"A modest reshuffle of the existing building's programme made room for a shared space around the base of the building," explained the studio.

"The extension's glass facade can be opened in many places, facilitating interaction in the space between the buildings."

At first floor level, spaces have been provided for the Sandberg Institute, which runs several of the Rietveld Academy's programmes.

On the roof, the ground space occupied by the building has been "given back" with the provision of a communal space that can be used for exhibitions, performances or large-scale constructions.

"The building is a social hub which quite naturally accommodates and spatially connects education, encounter, relaxation and collectivism and in which changing perspectives inform the educational environment," said the practice. 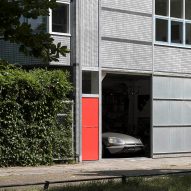 The woven steel that covers the building's upper level was chosen to minimise overheating from sunlight, and the cantilever of the first floor is intended to create covered areas below that can be "claimed" as work or social spaces.

Areas of this steel-clad facade can be folded back to allow more light into the workspaces, mirroring the folding doors at ground floor level.

Throughout the interiors, white spaces have been introduced, providing areas designed and executed by members of the community, such as one lined in textured tiles.

Paulien Bremmer founded her studio in 2001, and initiated FedLev in 2011. Hootmans Architects, who collaborated on the project, recently completed an extension to a 1970s courthouse in the Dutch city of Zwolle.

Photography is by Johannes Schwartz and Jeroen Verrecht.