Design Academy Eindhoven graduate Micheline Nahra has disassembled a four-person dinner setting and rebuilt it for one person, in a bid to make absence visible.

With a set-up originally meant for a group of family or friends now dedicated to a single person, A Dinner for One tells a story of loss.

"It's a signifier of three people that are now absent, of a former normalcy of life that is now absent, and a situation that has been transformed into a memory," Nahra told Dezeen.

Taking a table in dark, lacquered wood with four matching chairs as her starting point, Nahra deconstructed them into their constituent parts. She then reassembled them into a single sculptural chair and table that are almost unrecognisable from the original.

The designer changed the way that the constituent elements of the original pieces were arranged, but nothing else – they were neither repainted nor carved or lacquered.

This particular design method results in a piece that honours the old, while making space for the new.

It is an approach that is derived from Nahra's background growing up in the so-called "security belt" in southern Lebanon, which was occupied by Israel for 18 years after the end of the First Lebanon War in 1982.

"Where I come from, destruction is a reality and reconstruction is inevitable," Nahra told Dezeen. "It was important to me to explore what happens during these two processes in order to have a better understanding of the context I come from."

For most of her life in Lebanon, she watched friends and family cling on to their homes and their property, compulsively maintaining and rebuilding what was broken.

"In the context of an unstable country that is always on the brink of collapse, the home seems to be the only place where a sense of security could be established, and where control could be regained," she explained.

So Nahra set out to turn deconstruction and reconstruction into a design approach, which could offer alternative ways to recover and rebuild.

Her process is based on theories of post-war reconstruction by architect Lebbeus Woods, who argues that our natural instinct in the face of destruction is to either recreate the old, stone for stone, or to erect something entirely new in its place.

Both of these are coping mechanisms, which sweep trauma under the rug in favour of "getting back to normal." 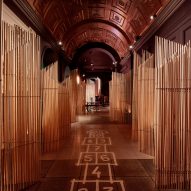 The in-between option, and the one Nahra chose to explore, involves creating something new from the damaged old – a way of remembering the past while offering new ways of living.

"I wanted to start from objects that were used, objects that had the traces of time, ones with a story," the designer explained. "So I found the original table and chairs at a secondhand store."

From here, the production process is divided into three parts. First, she deconstructed the table and chairs into their individual components.

"The table was broken down into 12 parts – the top, the four legs and structural beams – and the chairs into 80 different pieces" said Nahra.

"At that point, the number four became an element that I wanted to respect, because it was a table and chairs for four people. So most of the individual components were cut into four."

In the second step, the components that were cut apart are reunited again, but turned inside-out in order to hide the lacquered parts and reveal the raw wood within. Finally, Nahra set about putting these pieces together as a dinner setting for a single person.

"During this phase, I treated all the pieces at hand as raw material, looking at the qualities of every piece and letting them guide the process," she explained.

"For example the pieces from the seats of the original chairs were very structural and lent themselves to being the base for the new chair."

Nahra hopes that through this deconstruction-reconstruction process, A Dinner for One carries more than just a story of absence.

"The process entails a layering of three stories, that of the original, the action of reconstruction, and the story of the new, reassembled object. Although it bares the traces of the original and the action, I wanted the objects to narrate a new story," she said.

A Dinner for One will be presented as part of the MA graduate show at the Design Academy Eindhoven between 19 and 27 October. Other recent projects by Eindhoven graduates include a tactile sound system and a 3D printer that uses recycled paper.

Photography is by Marie Rime.