Italian town squares became Branch Studio Architects' point of reference for the design of this school administration office in Melbourne, which is almost entirely lined in cardboard tubes.

Caroline Chisholm College is located in Melbourne's Braybrook suburb and had previously played host to a "highly inefficient" administration office that had a rabbit-warren of dark workspaces.

Untouched since the 1970s, several of its rooms were also dated in appearance with lacklustre blue walls and beige Venetian blinds.

Branch Studio Architects was brought on board to completely overhaul the office and make it suitable to accommodate the school's accounts and welfare departments, as well as a handful of rooms where staff could hold meetings with students.

The practice decided to model the office's interior after piazzas – large public squares seen in Italian towns which are typically used for community gatherings and centred by a statue or monument.

This is also what lent the project its name of Piazza Dell'Ufficio, which translates from Italian to "office square".

"Our pedagogical objective was to create a space, which reduced the visual barriers between staff and student interactions," explained the practice, which is headed up by Brad Wray and Nicholas Russo.

The hub of the office is now a piazza-style room where staff can encounter and talk with students passing through, or hold large-scale meetings.

Some of the peripheral walls curve inwards to form seating nooks, complete with grey-leather banquettes. 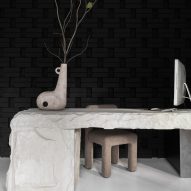 At the room's centre is Branch Studio Architects' interpretation of a public monument – a floor-to-ceiling cylindrical pod that's referred to as a "clock tower". Inside there is a small table with a recessed countertop, which has been made to resemble a clock face.

Almost every surface has been lined with slim cardboard tubes that cost just $2.50 each. Some of the tubes have even been slotted into narrow gaps that run down the middle of the staircase balustrades.

"The tubes both individually and in mass are used to create a continuous visual curve and warmth to soften the interior spaces throughout," added the practice.

Glass-fronted arched doors lead off to a series of boardrooms, communal work areas and private offices for individual members of staff.

Dropped ceilings have been erected throughout to give spaces a more intimate feel, while sweeping and diagonal lines have also been marked into the floor to create "axial links" between the office's different rooms.

This isn't the first time that Branch Studio Architects has completed an education-focused project – back in 2016 the practice updated a school in western Melbourne to feature a weathering steel bridge, which doubles-up as an art gallery for students.

Piazza Dell'Ufficio is shortlisted in the small workspace interior category of the 2019 Dezeen Awards. It will compete against projects like Ya Vsesvit, a monochromatic co-working space in Ukraine and Scandinavian Spaceship, a colourful office in Oslo with futuristic decor details.

Photography is by Peter Clarke